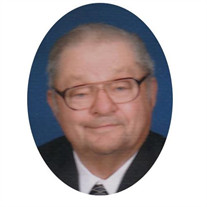 Alois P. Doll, age 85 of Morris, died Thursday, June 7, 2018 at The Waters of Batesville. Born February 14, 1933 in Batesville, he is the son of Alma (Nee: Humig) and Lambert Doll. Alois served in the army during the Korean War. He married Doris Simmermeyer April 28, 1956 at St. Mary’s of the Rock Church and she preceded him in death on January 23, 2013. Alois was a farmer and also worked 15 years in maintenance for the Sunman-Dearborn School Corporation. A member of St. Anthony’s Church, he was also a member of the men’s choir for over 50 years and a former member of the Morris Fire Department. With a large family to raise, Alois stayed busy working, which didn’t leave a lot of free time. When he did get some down time, he enjoyed watching football, following the Reds or deer and squirrel hunting. Each year he would put out a large garden. Even after the kids were out of the house, he continued to plant the large garden up until last year, keeping them in fresh produce. He is survived by his daughters and son-in-law Deborah Higham of Morris, Karen and Gary Bedel of Enochsburg; sons and daughter-in-laws Jerome (Jake) and Carolyn Doll of St. Mary’s, Randall and Donna Doll of Sunman, Dan and Mary Lou Doll of Sunman, David (Mick) Doll of Oak Forest, Kurt and Ramona Doll of Sunman, Alan and Ce Ce Doll of Sunman, Eric and Gina Doll of Sunman; sisters Anna Mae Erhart of Morris, Shirley Doll of Indianapolis; daughter-in-law Wanda Alig of St. Leon; 32 grandchildren and 15 great grandchildren. In addition to his parents and wife Doris, he is also preceded in death by sons Tim and Charles Doll; sister Rosemary Dierckman; brother Floyd Doll; son-in-law David Higham; one granddaughter and one great granddaughter. Visitation is Monday, June 11th, from 4 – 7 p.m. at the funeral home. Funeral services are 10 a.m. Tuesday, June 12th at St. Anthony’s church with Rev. John Geis officiating. Burial will follow in the church cemetery with military rites conducted by the Batesville V.F.W. Post #3183 and the Prell-Bland American Legion Post #271. The family requests memorials to the St. Anthony’s Cemetery Fund, the Morris Fire Department or Gibault School.

Alois P. Doll, age 85 of Morris, died Thursday, June 7, 2018 at The Waters of Batesville. Born February 14, 1933 in Batesville, he is the son of Alma (Nee: Humig) and Lambert Doll. Alois served in the army during the Korean War. He married... View Obituary & Service Information

The family of Alois P. Doll created this Life Tributes page to make it easy to share your memories.

Send flowers to the Doll family.