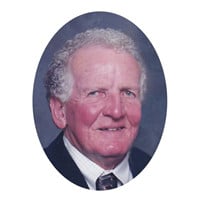 Alvin C. “Speed” Laudick, age 84 of Batesville, died Monday, July 16, 2018 at his home. Born April 5, 1934 in Batesville, he is the son of Elizabeth (Nee: Gander) and Aloysius Laudick. He married Lois Harpring July 8, 1953 at St. Louis Church and she preceded him in death March 10, 2015. Speed was a supervisor for Batesville Casket Company, retiring in 1993 after 39 years. Shortly after retiring, he went to work at North Branch Golf Course and turned a hobby into another 25 years of working. He was a member of the Batesville Knights of Columbus Council #1461 and a former longtime member of the Batesville Eagles Aerie #1130. To say Speed loved sports would be an understatement. Along with being an avid golfer with 12 holes-in-one to his credit, he was also a huge I.U., Reds and Bengals fan. He coached and played for years on the Hillenbrand’s Monoseal softball team as well as coaching the plant basketball team. Also, for years he bowled on Thursday night in the Hillenbrand league. Family was extremely important to him. He dearly loved his wife and children and absolutely delighted spending time with the grandkids and great grandkids. His family joked that he while he loved Christmas, he was like a little kid. He would pinch, shake, and try to sneak a peek or pester the family, trying to get them to tell him what were in his presents. He had a habit of addressing women as “peach” and men as “son” and the family also chuckled about his bad jokes and his German heritage. Seems Speed liked things like Limburger cheese, pickled herring and although not necessarily a German thing, he ate an awful lot of tomatoes. He is survived by his daughters Mary Beth (Brent) Gibson of Batesville, Kimberly (Eric) Moenter of Batesville; son Gregory (Marilyn) Laudick of Guilford, Indiana; seven grandchildren and thirteen great grandchildren. In addition to his wife and parents, he is also preceded in death by his sister Mary Jane Prickel and brother Herbert Laudick. Visitation is Wednesday, July 18th, from 4 – 7 p.m. at the Weigel Funeral Home. Funeral services are 10 a.m. Thursday, July 19th at St. Louis Church with Rev. Stan Pondo officiating and burial will follow in the church cemetery. The family requests memorials to the Batesville Athletic Boosters or The Zachary A. Litzinger Memorial Scholarship Fund.

The family of Alvin C. "Speed" Laudick created this Life Tributes page to make it easy to share your memories.

Send flowers to the Laudick family.