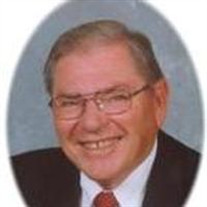 Anthony M. Wickens, age 69 of Batesville, died Sunday, January 30, 2011, at St. Andrew’s Health Campus. Born July 18, 1941 in Richmond, Indiana, he is the son of Marie (Nee: Roy) and Richard Wickens. He married Judith Ann Hess on October 19, 1963 at St. James the Less Catholic Church in Columbus, Ohio. He served in the Air Force from 1960 to 1964. After the service, he attended Franklin University in Columbus and graduated with an Engineering degree. He worked seven years with Delta Faucet Company in Greensburg and eleven years with the Hill-Rom Company in Batesville as an engineer.Tony enjoyed many interests. He liked H-O models trains and especially liked riding the real thing as long as they were steam engines. His family shared that he was THE Ohio State fan of THE Ohio State University - which may explain his dislike for the song “Rocky Top”. Tony was a huge science fiction enthusiast and an avid reader of the subject. Not surprising then that he also loved Star Trek. Other T.V. show favorites included NCIS and J.A.G. For relaxation he enjoyed yard work and mowing the grass, as well as gardening, although his family indicated it was more “piddling in the garden” than anything since he didn’t have much of a green thumb. Tony and Judy liked to travel and have visited many areas of the country through the years. While the Smokey Mountains was a favorite stop, their most memorable was a 40th anniversary trip into Canada. They traveled from Calgary to Vancouver by bus, plane and of course train. Tony was a member of the Batesville Kiwanis as well as a past president and secretary for the group, the Knights of Columbus Council #1461, Prell-Bland American Legion Post #271, the Society of Manufacturing Engineers and St. Louis Church. Tony was also instrumental in starting the RCIA program at St. Louis Church. RCIA or Rite of Christian Initiation of Adults is the process by which interested persons gradually become members of the Catholic ChurchHe is survived by his wife Judy, sons and daughter-in-laws Michael and Carrie Wickens of St. Louis, Missouri, Stephen and Sabrina Wickens of Bremen, Indiana, son Kevin Wickens and his fiancé Molly of Bremerton, Washington; sisters Theresa Atwood of Lafayette, Indiana, Mary Ellen Staley of Romney, Indiana, Bernadette Louden of Indianapolis, Margaret Reynolds of Anderson, Indiana and grandchildren Zachary Wickens, LaurieAnne Wickens, Kristopher Wickens, James Wickens and Hannah Eberly. He is preceded in death by his parents.Visitation is Wednesday, February 2nd, from 4-7 p.m. at the funeral home with a rosary service at 4 p.m. Funeral services are 10 a.m. Thursday, February 3rd, at St. Louis Church with Rev. Stephen Akange officiating. Military rites will be conducted by the Prell-Bland American Legion Post #271 and the Batesville V.F.W. Post #3183. Graveside services will be held 3 p.m. Thursday afternoon at St. Joseph’s Cemetery in Lockbourne, Ohio. The family requests memorials to St. Louis School Tuition Angels.

The family of Anthony M. Wickens created this Life Tributes page to make it easy to share your memories.

Send flowers to the Wickens family.