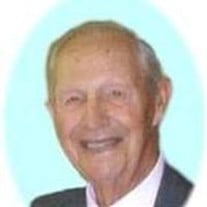 Charles B. Suding, age 94 of Batesville, died Sunday, July 14, 2013 at his residence. Born February 12, 1919 in New Point, Indiana, he is the son of Veronica (Nee: Walke) and Joseph Suding. He married Virginia Voegele July 30, 1949 at St. Louis Church in Batesville. He was a farmer as well as an upholster at the Rom-Weber Company for over 35 years. He retired from Rom-Weber’s in 1983. According to his family, Charlie was easy going, always had a smile on his face and liked to laugh and be around people. The annual church picnic was a favorite event giving him the chance to catch up with friends he hadn’t seen for awhile and the porch swing in his breezeway at home also provided the perfect gathering spot to enjoy family and friends. It was also ideal for a cup of coffee, bird watching and the company of his beloved Queenie, a Welsh Corgi. Charlie had a love for the outdoors, so naturally that’s where many of his interests took him. He was a long time deer hunter and could often be found fishing at his son’s pond. He also liked to mushroom hunt and water ski. For years he had a boat and taught each of the kids how to ski. Other hobbies included wine making and refinishing antiques. He spent nearly 90 years on the family farm and in later years would get around on the property in an old golf cart.He is survived by his wife Virginia; daughters and son-in-laws Cindy Schebler of Anchorage, Alaska, Nancy and Keith Hull of Palmer, Alaska, Charlene and Steve Dallas of Batesville, Rita Suding of Batesville; son Dwight Suding also of Batesville; nine grandchildren and four great grandchildren. In addition to his parents, he is also preceded in death by sisters Marie Benton, Josephine Wissel, Matilda Starke, Anna Beuke and brothers Joseph, Herman (Hank) and Edward Suding.Visitation is Thursday, July 18th, from 4-7 p.m. with a rosary service at 4 p.m. at the Weigel Funeral Home. Funeral services are 10:30 a.m. Friday, July 19th, at St. Louis Church with Rev. Randy Summers officiating. Burial will follow in the church cemetery. The family requests memorials to Hospice of Margaret Mary Health or the American Heart Association.

The family of Charles B. Suding created this Life Tributes page to make it easy to share your memories.

Send flowers to the Suding family.