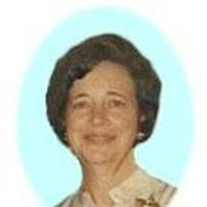 Clara L. Speth, age 96 of Selmer, Tennessee and formerly of Batesville, died Sunday, April 10, 2011 in Selmer. Born September 11, 1914 in Oldenburg, Indiana, she is the daughter of Mary (Nee: Ertel) and Joseph Merchen. She married Urban Speth September 14, 1940 at Holy Family Church in Oldenburg and he preceded her in death May 13, 1982. Countless local baby boomers will remember Clara as their kindergarten teacher. She was a member of St. Louis Church, the Retired Teachers Association, a 50 year member of the Phi Beta Psi Sorority and as well as a past president and a member of Hillcrest Country Club.Clara enjoyed many hobbies and interests. She and Urb would put out a garden every year and can their harvest each fall along with making tomato juice and ketchup. Her children can still picture row upon row of quart jars in the cellar waiting to be used up over the winter. Clara was also a good cook. She would often make strawberry sponge cake for the Sisters at St. Louis Church. The smell of pot roast and an occasional turkey takes the family back to Sunday afternoons growing up and the difference of opinion with dad for the last of that heavenly gravy. For years she belong to a bridge club and “the birthday girls”, which was a group of close friends that would go out and celebrate each other’s birthdays in addition to playing cards. A talented sewer, she made many of her families’ clothes along with matching outfits for her daughter’s dolls. Clara was a devout woman, attending Mass every morning after retiring and soon joined a group of 6 to 8 ladies who would usually then go to breakfast after church. She quipped to her daughter she “wasn’t sure if I go to church for the good Lord or the fun afterwards.” She is survived by her son Jim Speth of Selmer, Tennessee; daughter Sue Giebel of Albuquerque, New Mexico; brother Edward Merchen of Danville, Illinois; five grandchildren, six great grandchildren and numerous nieces, nephews and cousins. In addition to her husband and parents, she is also preceded in death by sisters Stella Merchen, Carletta Kaiser and brothers Robert and Marion Merchen.Visitation is Friday, April 15th, from 5-7 p.m. at the funeral home with a rosary service at 5 p.m. Funeral services are 11 a.m. Saturday, April 16th, at St. Louis Church with Rev. Randy Summers officiating. Burial will follow in the church cemetery. The family requests memorials to Phi Beta Psi Sorority Cancer Research.

The family of Clara L. Speth created this Life Tributes page to make it easy to share your memories.

Send flowers to the Speth family.