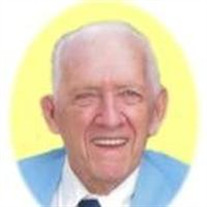 Clem died peacefully at his home March 16, 2009, at Mangrove Bay in Jupiter, FL at age 95. He was born May 8, 1913, the third of Gertrude Corcoran and Joseph Stratman’s seven children in Cincinnati, Ohio, where he attended Purcell High School and Xavier University and married wife Cora in 1938 “on a shoestring and a prayer”. Clem started work as a stock boy at Brenneman Company and rose to be a branch manager at age twenty, later becoming District Manager. Carey-McFall Co. recruited him to Philadelphia in 1950 as a General Manager, and he later became Executive Vice President. Clem and Cora retired to Florida and Indiana in 1975.Clem loved fishing, hunting, boating and storytelling, but his biggest love was business. He enjoyed “the good life” aspired to by most Americans – a beautiful wife and home, children and family, and a job he thrived on. Throughout Clem’s life he harbored a deep love of his country and its history. As a member of “the greatest generation,” he was born at the dawn of aviation, survived the influenza epidemic of 1917, World War I and II, the Korean conflict, Vietnam, Iraq and Afghanistan wars. He lived to see a man on the moon, the international space station, the Internet and virtual reality.Clem is survived by his beloved wife of 71 years, Cora Doyle, son Terry and his wife Judy of Long Beach, Indiana; daughters Denise Stratman of Lawrenceville, New Jersey, Sandra Stratman of East Haven, Connecticut, “adopted” daughter Sandra Campbell, grandchildren Deborah, Stephen and wife Kelly, David and wife Colette, great granddaughters Ella and Emery, sister Lucille Nelson and her husband Ellsworth, brother Tony and his wife Norma, and numerous nieces, nephews and their progeny. He will be greatly missed. In addition to his parents, he is also preceded in death by sister Elizabeth Roach and brothers Werner, William and John Stratman.Visitation will be held at the funeral home in Batesville, Indiana on Sunday, March 22nd from 1:00-4:00 P.M., with a rosary service at 3:30 p.m. Funeral services are 10 a.m. Monday, March 23rd, at St. Louis Catholic Church with Rev. Rob Hankee officiating. Burial will be at Cliff Hill Cemetery in Versailles, Indiana. As an alternative to flowers, donations may be directed to the Hospice of Palm Beach County Foundation (http://www.hpbcf.org/), 5300 East Avenue, West Palm Beach, FL 33407.

Clem died peacefully at his home March 16, 2009, at Mangrove Bay in Jupiter, FL at age 95. He was born May 8, 1913, the third of Gertrude Corcoran and Joseph Stratman&#8217;s seven children in Cincinnati, Ohio, where he attended Purcell High... View Obituary & Service Information

The family of Clement H. Stratman created this Life Tributes page to make it easy to share your memories.

Send flowers to the Stratman family.