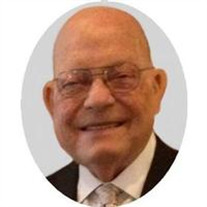 Cletus H. Suttman, age 79 of Oldenburg, died Wednesday, August 3, 2016 at his residence. Born September 28, 1936 in Franklin County Indiana, he is the son of Lillian (Nee: Niese) and John Suttmann. He married Carol Ann Obermeyer June 24, 1961 and she preceded him in death January 31, 1975. He married Norma Kemker November 21, 1978 and she survives. Clete worked at the Hill-Rom Company 45 years before retiring in 1999 and was a member of Holy Family Church. Clete enjoyed many interests. Among them were flower and vegetable gardening, playing corn hole and cards, especially Euchre and Crowns. He was a league bowler for many years and followed the Reds during the summer, the Colts during the fall and I.U. basketball during the winter. According to his family, he made great fried chicken but he, himself, liked going out to eat at buffet's. And a great buffet had shrimp! A stickler about food going to waste, he made sure all plates were cleaned. Clete loved having his grandchildren around and enjoyed watching them play. He is survived by wife Norma; daughters Glenda Suttman of Cincinnati, Anita (Gary) Merkel of Oldenburg, Carolyn (Ted) Nobbe of Batesville, Theresa (Dale) Hooten of Batesville, Robin Weaver of Aurora, Indiana; sons Glenn (Debbie) Suttman of Batesville, Cletus (Kari) Suttman of Grand Rapids, Michigan, David Tingle of Cincinnati, Wayne (Robin) Tingle of Batesville, Mark and Robert Tingle, both of Aurora, Indiana; sister Clarissa "Chris" Adams of West Chester, Ohio; 25 grandchildren and 22 great grandchildren. In addition to his wife Carol Ann and his parents, he is also preceded in death by his daughter Rosemary Suttman; sisters Sarah Jones, Alvina Herbert, Martha Wilhelm and brothers Wilbur and Paul Suttmann. Visitation is Friday, August 5th, from 4 - 7 p.m. at the funeral home. Funeral services are 10 a.m. Saturday, August 6th at Holy Family Church with Rev. David Kobak O.F.M. officiating. Burial will follow in the church cemetery. The family requests memorials to the American Heart Association.

The family of Cletus H. Suttman created this Life Tributes page to make it easy to share your memories.