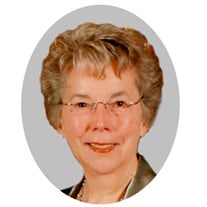 Colleen Murphy Johns, formerly of Harrisburg IL , passed away on December 7, 2021 , at the age of 93, in Batesville IN. Colleen (“ MaMa Colleen”) was born on November 24, 1928 in the Dallasania Community of Saline County to the late Oral L. and Marie Smothers Murphy. On November 9, 1946, she was united in marriage to Tommie Johns, who preceded her in death on June 16, 2000. Colleen was a member of the First United Methodist Church of Harrisburg and a member of PEO .She graduated from Harrisburg High School in 1946; she was proud to belong to the “Last of the Taylor Made’s” Class of ’46 and organized many class reunions. Her first job was working at Myron’s Dress Shop as a bookkeeper. Several months later, she went to work for Barger Bookkeeping Service. She worked for Mr. Barger until 1973 when she left to manage the office at Tom Johns Ford Dealership. In 1977 she began her career with Green Thumb, Inc, where she served as a Bookkeeper, Office Manager, Regional Office Manager and Field Office Tech Support. She retired in 2003 when she was 75 years young. Colleen was a computer wizard (self-taught, “sink or swim” was her work motto). She used those skills later in life to organize family photos, shop on Amazon and to catch up on Facebook. After retirement, she enjoyed traveling to see family and friends. Her favorite places included Capri, Italy and South Bend Indiana to watch Notre Dame football with her beloved friend John. Colleen is survived by a daughter, Linda (David) Adams, Batesville IN; three grandchildren: Jeremy (Shawna) Johns, Morganfield KY, Wes (Misty) Adams Trenton, NJ, Katrinka (Ted) Rynder of Evansville IN and great grandchildren: Annaclaire, Jerra and Mia Johns; Shiloh Stevers; Makaylynn Sheldon;Whitney and Austin Adams; and two great-great grandchildren, Quincy and Asher. Colleen loved watching her grandchildren grow up, and thrived when her great-grandchildren came into her life. They brought unspeakable joy to her senior years. They loved “MaMa” as much as she loved them. She was preceded in death by her parents, husband Tommie, son Jeff, and two brothers, John V. Murphy and Larry Keith Murphy. A beloved companion, John Molinarolo, and her sweet “Pepper-Dog” also preceded her in death. Funeral arrangements are entrusted to Weigel Funeral Home , Batesville IN and J.M. Weirauch Funeral Home in Harrisburg IL. Visitation will be held on Friday, December 10 from 5-7 pm at J.M.Weirauch Funeral Home. Graveside services will be held at Sunset Lawn Cemetery on Saturday at 11:00 a.m. The Johns Family would like to extend special thanks to all of the wonderful caregivers Colleen had this past year. She was blessed to have many caring hearts and hands touch her, and she touched their hearts as well. Thank you to the staff at The Villas of Holly Brook, St. Andrews Health Campus, and Margaret Mary Hospice. The family requests that in lieu of flowers, memorial donations be made to the Outreach Committee at the First United Methodist Church, 122 W. Poplar St, Harrisburg IL 62946; or to St. Anne’s Catholic Church, 304 Church St. Morganfield KY 42437

The family of Colleen Johns created this Life Tributes page to make it easy to share your memories.

Send flowers to the Johns family.