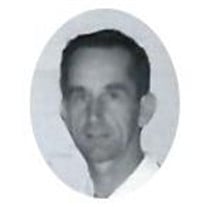 Daniel A. Ertel was born August 18, 1924 on the family farm in Spades, Indiana. He is the son of Frances (Nee: Risselman) and Harry Ertel. In March of 1943 he was drafted into the Army, spending three years in the service, the last 17 months overseas. Part of the 603rd tank destroyer battalion, they were attached to the Third Army commanded by General George Patton. On the front lines near Bastogne, Belgium, Patton addressed their battalion. Dan was an assistant gunner in an M-18 tank responsible for loading anti-tank shells. Toward the end of the war he stood guard over the German officers who were tried in the Nuremberg Trials for war crimes including Herman Goring and Rudolf Hess. After returning from the service, he married Edwina Weisenbach February 15, 1947 at St. Anthony’s Church in Morris. Dan worked at Nobbe Motors, running the service station for 33 years. He would later work 12 years at Hill-Rom as an assembly worker. Before being drafted into the war, Dan played on the Morris Tri-County League baseball team. Primary a third baseman, he also played some shortstop and second base along with being the lead-off hitter. Growing up during the depression and having lost his father at a young age, he learned to get by without spending much money. His family teased that if you gave him $5 dollars, he’d likely still have it in his wallet a year later but he was also one of the most unselfish people you’d ever meet. He is survived by his wife Edwina of Morris; daughters Carol Trepkus of Fairfield, Ohio, Nancy (Bill) Baird of Nashville, Tennessee, Deborah (Stephen) Lowe of Philadelphia, Pennsylvania, Patti (Dan) Hoff of Batesville; sons Gary (Julie) Ertel of Indianapolis, Thomas Ertel of Batesville; sisters Phyllis Moeller of Hamilton, Ohio, Viola Grossman of Batesville; nine grandchildren and fifteen great grandchildren. In addition to his parents, he is also preceded in death by sister Eileen Salatin and brothers Herschel, Harry and Mark Ertel and Julius Schomber. Visitation is Wednesday, January 16th, from 4 – 8 p.m. at the funeral home. Funeral services are 10 a.m. Thursday, January 17th at St. Anthony’s Church with Rev. Shaun Whittington officiating. Burial will follow in the church cemetery with military graveside rites conducted by the Ripley County V.F.W. Post #3183 and the Prell-Bland American Legion Post #271. The family requests memorials to the Morris Volunteer Fire Department.

Daniel A. Ertel was born August 18, 1924 on the family farm in Spades, Indiana. He is the son of Frances (Nee: Risselman) and Harry Ertel. In March of 1943 he was drafted into the Army, spending three years in the service, the last 17 months... View Obituary & Service Information

The family of Daniel A. Ertel created this Life Tributes page to make it easy to share your memories.

Send flowers to the Ertel family.