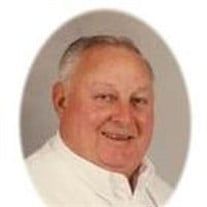 David E. Wagner Sr., age 81 of Batesville, died Sunday, June 24, 2012, at Christ Hospital in Cincinnati. Born April 29, 1931 in Batesville, he is the son of Mary Thelma (Nee: Schoopman) and William Wagner. He married Janice Steinmetz June 28, 1952 at St. Martin’s Church in Yorkville, Indiana. Dave spent 45 years at Hill-Rom wearing many different hats that included assembly, welding, engineer and supervisor before retiring in 1996. He was a member of St. Louis Church, the Knights of St. John, the Knights of Columbus as well as a former president of the Eagles #1130.Dave’s hobbies and interests were varied. He spent well over 20 years bowling in a work league in addition to a mixed league with Janice. An avid card player, he was up for any game, especially Solo, 7-up, Euchre and Poker. He was an accomplished painter and all of the kids have some of his best work hanging in their homes. Although the History Channel and war documentaries were programs he liked to watch, Janice teased that he spent most of his time flipping through the channels. Dave and Janice loved to travel and camp and while they have enjoyed criss-crossing the country along with visits to Mexico and the Bahamas, their favorite destinations were Hawaii and Wyoming. They also have a small acreage outside of town that the family indicated was dad’s second home. After retirement, they became snow birds, spending the winter months in Florida and although Dave liked seafood and pretty much anything grilled, salmon patties and macaroni and cheese were big no-no’s. He is survived by his wife Janice; daughters and son-in-laws Rebecca and Terry Weberding, Pamela and Scott Weisenbach, Cynthia and Ivan Gartenman Jr., Melody and Ron (Jobie) Jobst, all of Batesville; son David Wagner Jr. of Batesville; sister Betty Powers of Columbus, Indiana; 10 grandchildren and 12 great grandchildren. In addition to his parents, he is also preceded in death by his brother Russell and step father Martin Alexander.Visitation is Wednesday, June 27th, from 4-7 p.m. at the funeral home. Funeral services are 11 a.m. Thursday, June 28th, at St. Louis Church with Rev. Randy Summers officiating. June 28th will mark the 60th anniversary of the beginning of their journey through life together. Burial will be in the church cemetery. The family requests memorials to E.M.S. 10 or Margaret Mary Hospital.

The family of David E. Wagner Sr. created this Life Tributes page to make it easy to share your memories.

Send flowers to the Wagner family.