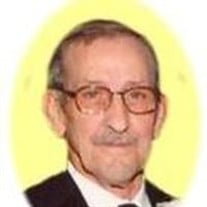 Dennis B. Simmermeyer, age 70 of St. Mary’s, died Sunday, March 20, 2011 at his home. Born December 26, 1940 in Franklin County Indiana, he is the son of Elizabeth (Nee: Freese) and Joseph Simmermeyer. He married Sharon Gutzwiller May 8, 1965 at St. Peter’s Church in St. Peter’s, Indiana. After serving in the army Dennis farmed in addition to working at K & S Bearings in Greensburg for 40 years. After “retiring” in 2002, he worked for the Batesville Herald Tribune eight years. He was a member of St. Mary’s of the Rock Church and the Prell-Bland American Legion Post #271. Dennis enjoyed farming and raising hogs. Many will remember his trademark – a cap. Rarely did you see him without one. His family laughed about how he would only drive Ford trucks and hated all things Chevy. Dennis was a hard working individual working two jobs during his lifetime which didn’t leave time for vacations. Instead, he liked to relax on the porch and take rides. In later years he would take the grandkids with him. He also worked crossword puzzles and word searches. He enjoyed spending time outside whether that be mushroom hunting, gardening or tinkering. His family laughed at his lack of #!?%+&@ patience although like many of us, he mellowed with age. He was fun spirited and loved animals…..well except for cats. But when he thought no one was looking, he would often be found petting them.He is survived by his wife Sharon; daughters Tracy Roell, Cindy Puente, both of Batesville, Susan Magee of Peppertown, Indiana; son Mike of St. Mary’s, Indiana; sisters Agatha Glaub, Ruthann Rudolf, Kathlyn Fichtner, all of Batesville, Zola Ernstes of Shelbyville, Indiana; brothers Raymond (Butch) and Carl (Buck), both of Batesville; six grandchildren and one great grandchild. In addition to his parents, he is also preceded in death by his sister Ethel Schomber and brother Arthur. Visitation is Tuesday, March 22nd, from 4-7 p.m. at the funeral home with a rosary service at 3:45 p.m. Funeral services are 10 a.m. Wednesday, March 23rd, at St. Mary’s of the Rock Church with Rev. Humbert Moster O.F.M. officiating. Burial will be in the church cemetery with military graveside rites conducted by the Prell-Bland American Legion Post #271 and the Batesville V.F.W. Post #3183. The family requests memorials to Hospice of Margaret Mary Hospital or St. Mary’s Church Building Fund.

Dennis B. Simmermeyer, age 70 of St. Mary&#8217;s, died Sunday, March 20, 2011 at his home. Born December 26, 1940 in Franklin County Indiana, he is the son of Elizabeth (Nee: Freese) and Joseph Simmermeyer. He married Sharon Gutzwiller May... View Obituary & Service Information

The family of Dennis B. Simmermeyer created this Life Tributes page to make it easy to share your memories.

Send flowers to the Simmermeyer family.