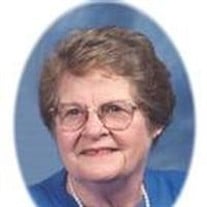 Dolores K. Voegele, age 80 of Batesville, died Tuesday, February 2, 2010 at her residence. Born March 23, 1929, in Yorkville, Indiana, she is the daughter of Emma (Nee: Bischoff) and Jacob Krieger. She married Martin “Woody” Voegele September 26, 1953 at St. Martin’s Church in Yorkville. Dolores was the owner and bookkeeper of Voegele Auto Parts for 52 years as well as a member of St. Louis Church and the Daughters of Isabella.Although Dolores was someone who preferred to stay busy, she made time to enjoy a number of different hobbies. An avid card player, she belonged to two card clubs and her favorite game was 500. She was very much an animal lover with numerous cats and dogs through the years and liked spending time watching the birds at the feeders. Time spent with her grandchildren was very special to her, as she loved them dearly. Her family spoke about what a wonderful cook she was and enthusiastically remembers her roast beef dinners and the vegetable soup she usually made on Saturdays. They also talked about her fondness for music and that she even played a little piano now and then. During her younger years she was an accomplished seamstress and made many of her children’s clothes in addition to clothes for the girls’ dolls along with some embroidering too. Her children’s favorite memory of mom would have to be her passion for sweets. Dolores found them all irresistible from cakes to pies and ice cream to her genuine affection for chocolate.She is survived by her daughters Barbara Hendrickson of Indianapolis, Lisa Etchason of New Palestine, Indiana; sons Martin of Greensburg, Indiana, Robert of Batesville; sister Rita Amberger of St. Mary’s, Indiana; eight grandchildren and one great grandchild. In addition to her husband Woody and her parents, she is also preceded in death by sisters Anne Merkel, Sylvia Tebbe and brother Elmer Krieger.Visitation is Friday, February 5th, from 4-7 p.m. at the funeral home with a rosary service at 6 p.m. Funeral services are 11 a.m. Saturday, February 6th, at St. Louis Church followed by burial in the church cemetery. Rev. Bernard Varghese will officiate. The family requests memorials to Hospice of Margaret Mary Hospital or the Alzheimer’s Association.

The family of Dolores K. Voegele created this Life Tributes page to make it easy to share your memories.

Send flowers to the Voegele family.