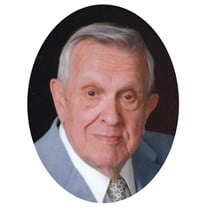 Donald J. Baechle Sr., age 88 of Bradenton, Florida and formerly of Batesville, died Thursday, June 6, 2019 at his home. Born April 28, 1931 in Sunman, Indiana, he is the son of Ada (Nee: Herzog) and Charles Baechle. He married Darlene Siebert June 25, 1955 at St. Louis Church. Don went to work for Hillenbrand Industries while in high school. Just before turning 20, he was drafted into the Navy, serving three year during the Korean War. After being discharged he went back to work at Hillenbrand Industries, where he would retire after 34 years. Don was a member of St. Louis Church and the Prell-Bland American Legion Post #271. In 2002 he and Darlene moved to the Golf Lakes community in Bradenton. Don was an avid golfer and had a lifelong passion for photography. The family explained that he was an amazing storyteller and possessed a quick wit and enjoyed seeing people happy and laughing. Don liked food as well, with a real weakness for ice cream. They said if he went on a trip, he would talk about the restaurants he’d been to rather than the places he’d seen or things he’d done. He also was a handyman able to fix or build anything with duct tape, wire or electrical tape. A favorite story is the infamous bush in the back yard. It always looked better than the others, but never seemed to grow. Later the family found out it had died several years earlier and he had spray painted it, so it kept its color. The color…………….evergreen! Don’s greatest joy was his family. He and Darlene would have celebrated their 64th anniversary at the end of this month. He delighted having family visit and having the grandkids and great grandkids around always put a twinkle in his eyes. Don is survived by his wife Darlene; daughter Deborah Zielinski of Cincinnati, Ohio; sons Timothy of Greensburg, Jeffrey of Westfield, Indiana, Donald Jr. of Batesville; grandchildren Clinton Baechle, Sarah Zielinski, Joshua Baechle, Shawn Zielinski, Erica Baechle, Jana Pace, Christopher Baechle, Justin Baechle, Corey Zielinski, Austin Baechle, Morgan Baechle and 12 great grandchildren. In addition to his parents, he is also preceded in death his son Thomas and sisters Virginia Hortemiller Cook and Ada Schoettelkotte. Visitation is Thursday, June 13th, from 9 – 11 a.m. at the funeral home. Funeral services follow at 11:30 a.m. at St. Louis Church with Rev. Stan Pondo officiating. Burial will be in the church cemetery with military graveside rites being conducted by the Prell-Bland American Legion Post #271 and Ripley County V.F.W. Post #3183. The family requests memorials to the Wounded Warrior Project or Southeastern Florida Guide Dogs.

The family of Donald J. Baechle Sr. created this Life Tributes page to make it easy to share your memories.

Send flowers to the Baechle family.