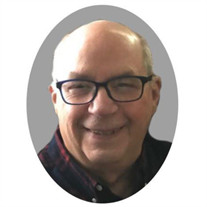 Donald Edward Volz of Oldenburg Indiana, died peacefully at his home on Tuesday, June 22nd, 2021, after battling an extended illness. His beloved wife, Judy was by his side. He is survived by his wife of 17 years, Judy Volz, brother, Dick Volz, sons, Brent Volz, Andy Volz (Shawna), Daniel Volz, Tim Meer (Teresa), daughter, Mindy Meyer (Brian), thirteen grandchildren and fifteen great grandchildren. Ask any one of them and they will tell you “He is the BEST Papaw Ever.” Donnie was an avid Notre Fan who never missed a game. He was a member of the Elks, VFW, American Legion, Moose Lodge, The Eagles, and Knights of Columbus, where you would often find him pulling tabs and enjoying good laugh with friends. Donnie had an enthusiasm for scavenging for fossils to add to his expansive collection. His hopes were to pass along this same enthusiasm to his grandchildren. Donnie joined the Navy at age 18 and later began a career as a plumber with Ford Motor Company where he retired after 40 years. He was a strong patriarch of his family, known for his quick wit and humor. A good friend to all; a man who demonstrated unconditional love and generosity. He was a proud father who took pride in raising his children to pursue a life of happiness while exhibiting love, integrity, and respect. Donnie was preceded in death by his parents, Stella Agnes (Hackman) and Edward J. Volz, his brother Bob Volz, sisters Mary- Barbara Parrish, (J Parrish), and Dianne Hanson, (Jim Hanson), son, Troy Meer, grandchildren, Marley Volz, Conner, and Kelsey Andrews. Visitation is Sunday, June 27th, from 1 – 4 p.m. at the funeral home. Funeral services are 10 a.m. Monday, June 28th at Holy Family Church with Rev. Carl Langenderfer officiating. Burial will follow in the church cemetery with military rites conducted by the Southeastern Indiana Honor Guard. The family requests memorials to the Eagle Fire Company.

Donald Edward Volz of Oldenburg Indiana, died peacefully at his home on Tuesday, June 22nd, 2021, after battling an extended illness. His beloved wife, Judy was by his side. He is survived by his wife of 17 years, Judy Volz, brother, Dick... View Obituary & Service Information

The family of Donald E. Volz created this Life Tributes page to make it easy to share your memories.

Donald Edward Volz of Oldenburg Indiana, died peacefully at his...

Send flowers to the Volz family.