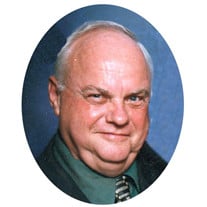 Donald J. Wenning, age 83 of Batesville, died Sunday, May 23, 2021 at St. Andrew’s Health Campus. Born November 14, 1937 in Batesville, he is the son of Hilda (Nee: Schebler) and Frank Wenning. He served in the navy from 1955-1958. After the service, Don would go to work for the Hill-Rom Company as a designer in the modeling department, retiring in 2004 after 46 years. He married Jean Hammerle February 24, 1968 at St. Louis Church and she preceded him in death on October 12, 1991. On June 19, 2004, he married Barb Fasbinder in Batesville. Don was an avid golfer. He was also a long-suffering Bengals fan and a devoted Reds fan. In his younger days Don enjoyed bike riding with his daughter, gardening and BBQ’s. A member of the St. Louis Festival Committee for over 40 years, each year he’d take a week’s vacation to help oversee the set-up for the church picnic. For many years, Don and a group of buddies would also take the day to attend carb day for the Indianapolis 500 and made sure to stay hydrated with barley pop. According to his family, Christmas was Don’s favorite time of the year and he looked forward to trips to Vegas and the local river boats. Although they teased that he loved anything on a plate, Don was especially fond of Barb’s pastries. He watched a lot of the Hallmark Channel and delighted in spending time at the park watching the squirrels chase each other around. What he treasured most was time spent with his grandkids. Don is survived by his wife Barb; daughter Lucy Fields of Indianapolis; sister Marlene Camarota of Mason, Ohio; brother Jim Wenning of Madison, Indiana; five grandchildren and four great grandchildren. In addition to his wife Jean and his parents, he is also preceded in death by sisters Pauline Huenke, Kathleen Scheidler and brothers Eugene, Ralph and Bob Wenning. Don’s wishes were to be cremated. Friends may call from 9 – 11 a.m. Thursday, May 27th, at the funeral home. Funeral services will follow at 11 a.m. with Rev. Jey Sengolraj officiating. Inurnment will be in St. Louis Cemetery with military graveside rites conducted by Ripley Co. V.F.W. Post #3183 and the Prell-Bland American Legion Post #271. The family requests memorials to Margaret Mary Health Foundation Hospice.

The family of Donald J. Wenning created this Life Tributes page to make it easy to share your memories.

Send flowers to the Wenning family.