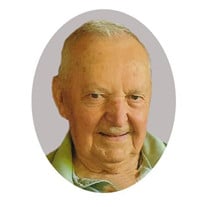 Earl A. “Hooker” Miller, age 87 of Batesville, died Thursday, August 16, 2018 at his home. Born May 9, 1931 in Ripley County Indiana, he is the son of Loretta (Nee: Holdgrieve) and Arthur Miller and served in the army during the Korean War. He married Alma Bloemer January 18, 1964 at St. Louis Church and was the maintenance coordinator for 23 years at the Hill-Rom Company before retiring in 1993. He was a member of the Batesville V.F.W. Post #3183, the Prell-Bland American Legion Post #271, life member of the Knights of Columbus Council #1461, Tri County Coonhunters Association and the Tri County Conservation Club. Hooker was an avid fisherman and trap shooter. In addition to fishing locally, he also made numerous trips to Canada with family and friends. Thursday mornings were spent trap shooting at Coonhunters and Sunday afternoons at Oldenburg. The family joked that Father’s Day, Birthday and Holiday gifts were boxes of shotgun shells and figuring out how to disguise the packaging. They were proud that he was still shooting at age 87 and at a nearly 90% proficiency rate. Hooker donated much time and his talents during the construction of the Knights hall and has bartended weekly since the beginning. He loved his dogs, feeding his birds and listening to Reds games on the radio. Hooker also had a workshop where he enjoyed woodworking and tinkering, as he could fix anything. His greatest joy, though, was his grandkids. He is survived by his wife Alma; daughter and son-in-law Ann and Rob Edwards; son Jim Miller, brother Bruce Miller, all of Batesville; grandchildren Justin Edwards, Lindsay (Chad) Konradi and great grandson Caleb Konradi. In addition to his parents, he is also preceded in death by brothers Arthur, Floyd and Lawrence Miller. Hooker’s wishes were to be cremated with no services. The family will receive friends at the funeral home on Saturday, August 25th, from 9 a.m. until Noon. Calling will conclude with military honors conducted by the Batesville V.F.W. and the Prell-Bland American Legion on the plaza of the funeral home. The family requests memorials to Batesville EMS 10 or Our Hospice of South Central Indiana.

The family of Earl A. "Hooker" Miller created this Life Tributes page to make it easy to share your memories.

Send flowers to the Miller family.