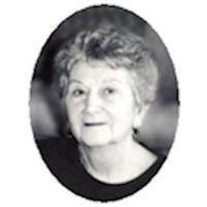 Ethel M. Seevers, age 85, was born in Batesville, IN on October 10, 1930. She passed away on October 20, 2015. Ethel was the daughter of Catherine Bischoff and Leonard Hoff. She married Robert O. Seevers on February 15, 1947. Ethel was employed at Batesville Casket Company as a Sales Administrator for twenty years before retiring. She was a member of St. Louis Church, the Bereavement Committee and the Knights of St. John. Ethel had many talents and interests. Her children remember her as an outstanding cook. There were many favorite meals but her strawberry shortcake and pies were always special treats. Ethel was also an excellent seamstress and when her daughters were young she would not only make their clothes, but also clothes for their dolls. In her later years she loved to shop. She was always very fashion conscious and had a keen talent for finding the best bargains. Many people will remember seeing Ethel on her daily walks through town and Liberty Park. To say she had a brisk pace would be an understatement. Ethel was always active and was a member of the YMCA's Silver Sneakers for several years. Her hobbies included solving cross-word puzzles and reading magazines and books. Most evenings she could be found watching her favorite TV shows, Jeopardy and Wheel of Fortune. Ethel and Bob traveled extensively and enjoyed several cruises. their favorite being the Alaskan cruise. Most importantly, Ethel was a devoted mother. She instilled in her children integrity, determination and a strong spirit. She would often say "No matter what, keep on going forward; always believe that things will work out, because they always will." Ethel is survived by her children Steve and Dave Seevers, Shari (Buck) Simmermeyer, Sandy Seevers and Terri (John) Dickey, sister Virginia Yargus, five grandchildren and four great grandchildren. She was preceded in death by her husband Robert Seevers, her brothers Oscar, Urban and Ralph Hoff and her sister Loretta Dirks. Visitation will be held at the funeral home on Monday, October 26th from 9 - 11 a.m. Funeral services will be held at St. Louis Church on Monday, October 26th at 11:30 a.m. with Father Stan Pondo officiating. A private burial service for the family will be held at St. Louis Catholic cemetery following the funeral. Memorial contributions may be made to the Alzheimer's Research Foundation, or to the Ripley Crossing Activities fund, in care of the funeral home.

Ethel M. Seevers, age 85, was born in Batesville, IN on October 10, 1930. She passed away on October 20, 2015. Ethel was the daughter of Catherine Bischoff and Leonard Hoff. She married Robert O. Seevers on February 15, 1947. Ethel was employed... View Obituary & Service Information

The family of Ethel M. Seevers created this Life Tributes page to make it easy to share your memories.

Send flowers to the Seevers family.