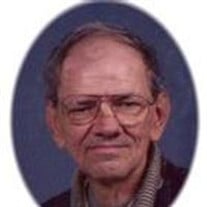 Eugene P. Wandling Sr., age 72 of New Point and formerly of Indianapolis, died Sunday, January 17, 2010, at the Heritage House in Greensburg. Born December 7, 1937 in Owego, New York, he is the son of Martha (Nee: Allen) and Peter Karabon. He married Helen Barnhorst May 16, 1983 in Indianapolis. Gene worked on the loading dock for Yellow Freight, retiring in 1990 after 17 years. He was a member of the Teamsters Local #135.While Gene’s hobbies weren’t numerous, they certainly were concentrated. Three things he was passionate about were bowling, dancing and fishing until health issues in recent years slowed him down. For as long as any can remember, he has been an avid bowler who was quite good. He and Helen attended dances often and delighted in dancing to their favorite song “Islands in the Stream.” Fishing was probably his favorite pastime and he went every opportunity he could. If you knew Gene, you knew how much he truly loved fishing. Because Helen enjoyed doing these things with him, it made them that much more special to him. Gene is survived by his wife Helen; daughters Loretta Crawford of Indianapolis, Deb Prickel of Batesville, Marla Burgess of Princeton, Indiana, Sheila Wandling of Indianapolis, Alisha Wandling of Indianapolis, Jennifer Wandling of Brookville, Indiana; sons Richard Wandling, John Peterson and Dennis Wandling all of Indianapolis, Robert Peterson, Paul Peterson and Jimmy Peterson all of New Point, Donnie Heldman of Indianapolis; sisters Janie Burge of Martinsville, Indiana, Darlene Batteker of Bloomington, Indiana; 31 grandchildren and 16 great grandchildren. In addition to his parents, he is also preceded in death by his son Eugene Wandling Jr. and sisters Judy Thompson and Mary Phelps.Visitation is Wednesday, January 20th, from 11 a.m. to 1 p.m. at the funeral home. Funeral services follow at 1 p.m. with Rev. R.T. Stringer officiating. Burial will be in the Rossburg Cemetery at New Point. The family requests memorials to Hospice or the Muscular Dystrophy Association.

Eugene P. Wandling Sr., age 72 of New Point and formerly of Indianapolis, died Sunday, January 17, 2010, at the Heritage House in Greensburg. Born December 7, 1937 in Owego, New York, he is the son of Martha (Nee: Allen) and Peter Karabon. He... View Obituary & Service Information

The family of Eugene P. Wandling Sr. created this Life Tributes page to make it easy to share your memories.

Send flowers to the Wandling family.