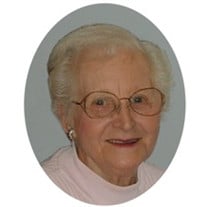 Eunice M. Riehle, age 95 of Sunman, died Sunday, December 10, 2017 at Margaret Mary Health.  Born November 17, 1922 in Batesville, she is the daughter of Nellie (Nee: Springman) and John Faust.  She married Francis Riehle Sr. November 16, 1946 at St. Louis Church and he preceded her in death on January 25, 2001.    In her early teens, Eunice’s mother began to take care of her grandmother, so evening meals became Eunice’s responsibility.  She developed into a good cook and her family fondly recalls Thursdays.  That was baking day and they would come home from school to the wonderful fragrance of orange-raisin rolls, sugar cookies or delicious fruit pies.  Holidays were always a special treat.  Eunice would fix the traditional turkey, dressing, sweet potatoes and pumpkin pie for Thanksgiving.  Christmas was roast beef, mashed potatoes, homemade rolls and green Jell-o.  Easter included bake ham or fried chicken, potato salad, baked beans and bunny cake.  For Eunice it was a labor of love.    When all the kids were in school, she started working as a housekeeper for the Neff’s and Romweber’s.  In 1972 she began working full time in the service department for Hill-Rom, retiring 15 years later in 1987.   She is survived by daughters Kathy Tekulve of Milan, Linda Fullenkamp of Sunman, Cindy Nurrenberg of Oldenburg; sons John of Batesville, Francis Jr. of Versailles; sister Jinny Werner of Batesville; 14 grandchildren; 27 great grandchildren and 2 great great grandchildren.  In addition to her husband and parents, she is also preceded in death by her brothers Ralph and Norbert Faust.   Visitation is Saturday, December 16th, from 9 – 11 a.m. at the funeral home. Funeral services follow at 11:30 a.m. at St. Peter’s Church in St. Peter’s, Indiana with the Very Reverend Sean Danda officiating.  Burial will follow in the church cemetery.  The family requests memorials to the St. Peter’s Cemetery Fund.

The family of Eunice M. Riehle created this Life Tributes page to make it easy to share your memories.

Send flowers to the Riehle family.