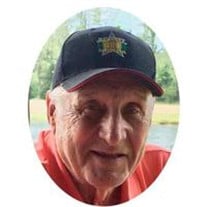 Floyd J. Werner, age 80 of Oldenburg, died Monday, May 22, 2017 at his home. Born March 28, 1937 in Franklin County Indiana, he is the son of Clara (Nee: Hartman) and Carl Werner. He served in the army between the Korean Conflict and the Vietnam War and was the long time owner of Floyd Werner Concrete and the Oldenburg Lumber Company. He also farmed, was a member of the Southeastern Indiana Home Builders Association and a former member of the Eagle Fire Company. Although Floyd had many interests, baseball was his passion. He played and managed in the Tri-County League for over 20 years, thoroughly enjoyed watching his grandkids play ball and was an avid Reds fan as well. When it was time to put his spikes and glove away, he took up golf and for years hosted the Floyd Werner Golf Tournament. He was a long time league bowler in Oldenburg as well as a Cleveland Browns fan. According to his family, Floyd looked forward to business trips in Vegas or Atlantic City, where he could stop off to try his luck at the casinos. They also said he was fearless, willing to take on building projects others were afraid to attempt. He is survived by daughters and son-in-laws Theresa and Jim Owens Jr., Becky and Jim McLean Jr., Carla and Andy Meer, all of Batesville, Cora Werner of Metamora, Indiana; sons and daughter-in-laws Steve and Kelly Werner, Mark and Rachel Werner, all of Batesville, Andy Werner of Oldenburg, Mathew Werner of Cincinnati; sister Sr. Mary Louise Werner O.S.F. of Oldenburg; brothers Ray Werner of Batesville, Charles Werner of Florence, Arizona, Donald Werner of Monte Sereno, California; 23 grandchildren and 11 great grandchildren. In addition to his parents, he is also preceded in death by brothers Edward and Robert Werner. Visitation is Thursday, May 25th from 4 – 7 p.m. at the funeral home. Funeral services are 11 a.m. Friday, May 26th, at Holy Family Church with Rev. John Hall officiating. Floyd’s wishes were to be cremated following services. Military rites will be conducted by the Batesville V.F.W. Post #3183 and the Prell-Bland American Legion Post #271 on the plaza in front of church after services.  The family requests memorials to the Batesville Youth Baseball and Softball Association or Margaret Mary Health Foundation Hospice.

Floyd J. Werner, age 80 of Oldenburg, died Monday, May 22, 2017 at his home. Born March 28, 1937 in Franklin County Indiana, he is the son of Clara (Nee: Hartman) and Carl Werner. He served in the army between the Korean Conflict and the Vietnam... View Obituary & Service Information

The family of Floyd J. Werner created this Life Tributes page to make it easy to share your memories.