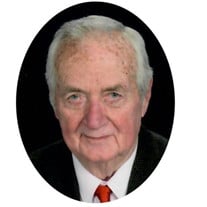 Francis J. Connelly III, age 88 of Batesville, died Tuesday, February 22, 2022 at the Waters of Batesville. Born September 20, 1933 in Cincinnati, Ohio, he is the son of Edith (Nee: Tuepker) and Francis Connelly Jr. He served in the Navy during the Korean War. Following the service, he worked at General Electric 30 years as a customer service manager and after retiring he started Connelly Technical Services, doing consulting work for many of his former clients. On June 10, 1974 he was married to Elizabeth Heinlein in Cincinnati. She preceded him in death June 25, 1990. He married Sue Hamilton March 13, 1992 in Cincinnati and she survives. A former Shriner, Frank was also a member of the Batesville Masonic Lodge #668, Batesville Lions Club, Batesville Kiwanis and the Batesville Friends of the Library. Gifted with a great sense of humor, Frank was quite a jokester and everybody was fair game for his humor. He enjoyed golfing; reading, especially Stephen King novels; doing crossword and jigsaw puzzles; was an avid Bengals fan as well as possessing a green thumb. He grew beautiful flower gardens and a vegetable garden that provided an abundance of produce for family and friends. Frank also enjoyed traveling, which was a benefit his job provided. While with GE he spent six years in Germany and was able to travel to most of Europe with family to experience the culture and sites of many countries. He is survived by his wife Sue; sons Jeff (Christy) Connelly of Batesville, Joseph Connelly of Kettering, Ohio, Tim (Judy) Connelly of Canaan, New Hampshire, John (Michele) Hamilton of Asheboro, North Carolina; eight grandchildren and seven great grandchildren. He is preceded in death by his parents, wife Beth and grandson Jesse Connelly. Frank’s wishes were to be cremated. A celebration of life will be held Saturday, March 5th from 1 – 3 p.m. at The Church of Jesus Christ of Latter Day Saints in Batesville. The family encourages casual, comfortable attire. Memorials may be made to Margaret Mary Health Foundation Hospice.

Francis J. Connelly III, age 88 of Batesville, died Tuesday, February 22, 2022 at the Waters of Batesville. Born September 20, 1933 in Cincinnati, Ohio, he is the son of Edith (Nee: Tuepker) and Francis Connelly Jr. He served in the Navy during... View Obituary & Service Information

The family of Francis J. Connelly III created this Life Tributes page to make it easy to share your memories.