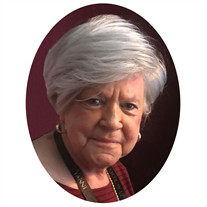 Gloria L. Paras. Age 81 of Batesville, died Friday, May 10, 2019 at Margaret Mary Health. Born June 22, 1937 in London, Ohio, she is the daughter of Patricia (Nee: Stevens) and Lawrence Dowler. She married Dr. J. Lingkod (Ling) Paras December 13, 1956 in Richmond, Indiana. He preceded her in death May 8, 2011. During Gloria’s life as a young woman, she worked for a Judge in Madison County, OH before moving to Columbus, Ohio to study, she also worked as a model for several department stores and retail advertising. In Columbus she met Ling, who was completing a medical residency. The couple was married for 55 years. Gloria was the owner and broker of Choice Properties. She was a member of the Business Professional Women’s Association of America, the Parish School of Religion, St. Louis Church and a former member of the Beta Sigma Phi Sorority. Gloria and Ling moved their family to Batesville, Indiana in 1962. Gloria was very active in the community. She led the development and fundraising efforts for the New Horizons facility, as well as serving as a longtime board member. She was also a member of the Margaret Mary Health Gala Auxiliary, and she loved being part of a Rosary group of Catholics from Southeastern Indiana. Gloria and Ling enjoyed traveling and were able to visit nearly every continent. Two of their favorite trips were to Switzerland and Argentina. Closer to home, family vacations were often spent at St. Petersburg Beach in Florida or visiting the Great Smoky Mountains. Some of Gloria’s favorite memories of early years in Batesville were times spent playing bridge or bowling with her lady friends. Gloria and Ling introduced Mah-Jongg to their close friends in Batesville and spent many evenings laughing and playing. Gloria and Ling loved family time and their grandchildren became one of Gloria’s greatest joys. She is survived by her children Felecia Paras (Steve) Krakowka of Columbus, Ohio, Teresita (Mike) Romweber of Metamora, Indiana, Pepe Paras of Batesville, Indiana, Maria Corazon (David Augustus) Paras of Chicago, Illinois; brother Steven (Susie) Dowler of London, Ohio and grandchildren Joseph Romweber, Bill Romweber and Isaac Krakowka. She is preceded in death by her husband and parents. Visitation is Thursday, May 16, 2019, from 4 – 7 p.m., with a rosary service at 3:45 p.m. at the funeral home. Mass of Christian Burial will be celebrated at 10:00 a.m. Friday, May 17, 2019 at St. Louis Church, with Rev. Stephen Akange officiating and the burial will follow in the parish cemetery. Memorials may be offered to the American Macular Degeneration Foundation (AMDF) or the American Heart Association. (AHA).

The family of Gloria L. Paras created this Life Tributes page to make it easy to share your memories.

Send flowers to the Paras family.