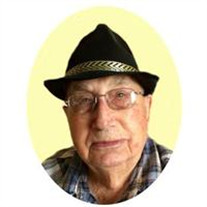 Harry C. Volz, age 95 of Batesville, died Monday, September 28, 2015 at the St. Andrew's Health Campus. Born April 24, 1920 in Ripley County Indiana, he is the son of May (Nee: Brueggeman) and Edward Volz. He married Gladys Sluder December 27, 1941 at St. Louis Church and she preceded him in death November 25, 1986. He married Mary Stolz-Nobbe April 24, 1998 at Holy Family Church and she survives. Harry served in the army during World War II in Northern France, the Rhineland, Central Europe and the Ardennes earning four bronze stars. Following the service, Harry would farm and drive a school bus before retiring. He was a member of St. Louis Church and the Batesville V.F.W. Post #3183. According to his family, Harry was pretty serious about his farming even when it came to his vegetable garden. Apparently he and several of his neighbors had a standing contest each year to see who could produce the first tomato. Homemade potions and mixing different varieties were all tried in hopes of being victorious. And like any good farmer, the farm channel was usually playing on the T.V. and he knew just about everybody in 50 mile radius. Harry was also an animal lover and many will remember that he exotic animals for years. He enjoyed golfing, listening to the Reds, country music and watching the Price is Right. Later in life he would become a snow bird, spending 25 years wintering down in Florida. Harry would often tell his son the secret to living a long life was a piece of chocolate every day, although the family rarely saw him eat just one. He is survived by his wife Mary; son Timothy Volz of Batesville, daughters Judy Caruso of Rochester, New York, Janet Andrews of St. George, Utah; six grandchildren and ten great grandchildren. In addition to his wife Gladys and his parents, he is also preceded in death by sister Marie Burns; brothers Paul, David, Edmund, Joseph, Raymond, William and Robert Volz as well as two grandsons. Visitation is Thursday, October 1st, from 4- 7 p.m. at the funeral home. Funeral services are 10 a.m. Friday, October 2nd, at St. Louis Church with Rev. Stan Pondo officiating. Burial will follow in the church cemetery with military honors conducted by the Batesville V.F.W. Post #3183 and the Prell-Bland American Legion Post #271. The family requests memorials to the Autism Society.

The family of Harry C. Volz created this Life Tributes page to make it easy to share your memories.

Send flowers to the Volz family.