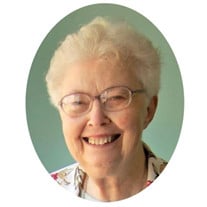 Sr. Helen Eckstein, formerly Sr. Antonella, age 81 of the Sisters of St. Francis in Oldenburg, Indiana, died on August 30, 2021 at the Motherhouse. Born as Helen Eckstein on March 31, 1940, in St. Nicholas, Indiana, to Romilda (Nee: Gauck) and Joseph Eckstein, she was the second of seven children and arrived on her mother’s birthday. The following year, the Eckstein family moved to Enochsburg and resided with Grandpa Gauck on his farm, and two more brothers were born. In the summer of 1945 they moved to a farm near Morris and a sister and two more brothers joined the family. Helen was enrolled at St. Anthony School at Morris where she first met the Oldenburg Franciscans and began to consider her religious calling. In 1953, on the Feast of St. Blaise, Helen’s world changed forever when her father, mother and two youngest brothers were coming home after church and their car was struck by a train, leaving no survivors. Helen and her remaining four siblings went to live with various aunts and uncles with Sr. Helen going to live with her aunt and uncle, Margaret and Quirin Gauck in Enochsburg. She completed her grade school years at Enochsburg before enrolling at Oldenburg Academy and becoming an aspirant in 1958, as she chose to follow her calling and join the Franciscan Sisters. On August 12, 1958, Sr. Helen was invested and became a Novice, receiving the name, Sr. Antonella, “little Anthony” after St. Anthony parish in Morris. On August 12, 1963, she made her final vows. She earned a teaching degree at Marian University and her Master’s in education at Xavier University, all while teaching full-time and attending classes during the summer and on weekends. Starting in 1960, Sr. Helen taught for three years at Holy Name in Beech Grove, Indiana, two years at St. Vincent de Paul in Cincinnati, and then 40 years at St. Michael, Brookville – where she served alongside her friend, Sr. Dominica Doyle. Sr. Helen and Sr. Dominica both returned to the Motherhouse in 2005 and she continued to volunteer on campus, first in the Associate Office and then for 13 years in the Development Office. In addition, she volunteered throughout the Motherhouse assisting at the switchboard, operating video equipment, playing in the Sisters’ Chime Choir and comforting Sisters in St. Clare Hall. When asked about some of her favorite memories Sr. Helen once noted, “Teaching was fulfilling for me because there was always something new to discover and I liked the variety that came with the increasing use of computers. I have fond memories of my European trip with Sr. Dominica and Sr. Helen Saler, but I’ll always treasure times when our remaining family would gather … and enjoy a hot cup of coffee and a slice of my sister Rosella’s homemade pie.” Survivors include siblings Anthony Eckstein of Cincinnati and Rosella Koehne of Batesville, and numerous nieces and nephews. She is preceded in death by her parents and brothers Joseph, Paul, Howard and Earl Eckstein. Visitation is Thursday, September 2nd, from 1 – 3 p.m. at the convent chapel. Funeral services follow at 3 p.m. with Rev. Vincent Lambert officiating and burial in the convent cemetery. Guests who have been vaccinated are welcome to attend but masks are mandatory. For those unable to attend, services will be live-streamed at https://youtu.be/-IZgMBi7BJo.

The family of Sr. Helen Eckstein created this Life Tributes page to make it easy to share your memories.

Send flowers to the Eckstein family.