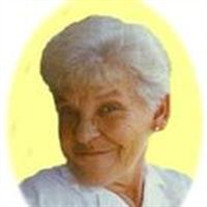 Helen M. Watts, age 78 of Batesville, died Thursday, December 17, 2009 at The Waters of Batesville. Born January 31, 1931 in Oneida, Tennessee, she is the daughter of Sally (Nee: Shelton) and John Coulter. She married Jack Watts Sr. on July 25, 1953 in Mt. Washington, Ohio. Helen was a homemaker with many interests. An excellent cook according to her children, “everything she made tasted good” but biscuits and gravy were Helen’s favorite. Her family also recalled that mom was “tough and spunky. During her younger days a favorite hobby of hers was needlepoint. In later years Helen discovered and developed her talent for making arts and crafts as well as working crossword puzzles. Her family agrees that her special gift was to nurture. She loved children and her greatest enjoyment was raising her children and being “nanny” to her grandchildren. She is survived by her son Jack Jr. of Laurel, Indiana; daughters Pam Berrago of Cape Coral, Florida, Penny Holt of Peppertown, Indiana; sisters Frances Richardson of Albuquerque, New Mexico, Opal Collins of Philadelphia, Pennsylvania, Sue Morgan of West Union, Ohio; brothers Jimmy of Cincinnati, Ohio, Pete of Williamsburg, Ohio, Hubert “Pedro” of Batavia, Ohio, Paul of Williamsburg, Ohio; 10 grandchildren and seven great grandchildren. In addition to her husband and parents, Helen is also preceded in death by her daughter Patty Beal.Visitation is Tuesday, December 22nd, from 11 a.m. to 1 p.m. at the funeral home. Funeral services follow at 1 p.m. with Rev. Tom Holt officiating. Graveside services will be held at 3 p.m. in Cincinnati at Arlington Memorial Gardens Cemetery on Compton Road. Memorials may be made to the family.

The family of Helen M. Watts created this Life Tributes page to make it easy to share your memories.

Send flowers to the Watts family.