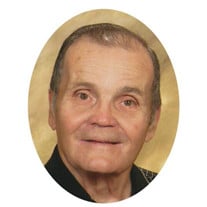 Howard A. “Ben” Federle, age 87 of Batesville, died Sunday June 14, 2020 at his home. Born April 20, 1933 in Batesville, he is the son of Anna (Nee: Raver) and Anthony Federle. He married Dorothy (Dot) Gutapfel August 9, 1958 at St. Louis Church. Ben served in the army during the Korean War and following the service would go to work for Batesville Casket Company as a foreman, retiring after 46 years. A member of St. Louis Church, he also belonged to the Prell-Bland American Legion Post #271 and the Knights of Columbus Council #1461. Saying Ben was an avid sports fan would be an understatement. He played baseball and fast pitch softball well into his 60’s. He liked to watch sports in general, but especially baseball and basketball. He became a San Francisco 49ers fan when he was stationed in California while in the service and enjoyed golfing, was a longtime league bowler and in his younger years hunted for deer, squirrel and rabbits as well as going fishing. He took several salmon fishing trips to Canada and Michigan over the years. Ben and Dot got to travel quite a bit and a couple of their favorite trips were a 25th anniversary cruise to the Bahama’s and a six-week road trip where they visited most of the states west of here. What he loved most was attending the grandchildren’s sporting events and extracurricular activities. He attended them all without fail. He is survived by his wife Dot; sons Randy (Nancy) of Batesville, Keith (Pat) of Hidden Valley; sisters Marlene Greiwe of Batesville, Joann Holzer of Knoxville, Tennessee; five grandchildren and four great grandchildren. In addition to his parents, he is also preceded in death by his sister Ruth Gehl and brothers Paul, Carl and Ralph Federle. Visitation is Wednesday, June 17th, from 9 – 11 a.m. at the funeral home. Attendees will need to observe social distancing while in the funeral home. Funeral services will follow at 11:30 a.m. at St. Louis Church with Rev. Stan Pondo officiating. Burial will be in the church cemetery with military graveside rites conducted by the Prell-Bland American Legion Post #271 and the Ripley County V.F.W. Post #3183. The family requests memorials to the Margaret Mary Health Foundation Hospice or the Batesville Athletic Boosters.

The family of Howard A. "Ben" Federle created this Life Tributes page to make it easy to share your memories.

Send flowers to the Federle family.