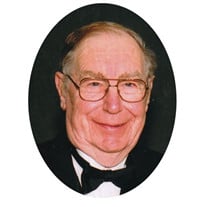 James A. Mack, age 86 of Batesville, died Monday, February 4, 2019 at his home. Born August 24, 1932 in Marion, Indiana, he is the son of Dorothy (Nee: Grogg) and Albert Mack. He married Mary Bernardine Haunert May 16, 1953 at St. Catherine of Siena Church in St. Maurice, Indiana and they celebrated their 65th wedding anniversary in 2018. Jim served in the army during the Korean War. Following his service, he would go to work for the Hill-Rom Company as a Senior Buyer, retiring in 1998 after 38 years. He was a member of St. Louis Church and Prell-Bland American Legion Post #271. Jim’s life centered around faith and family. Very involved in church, he was a lector for over 30 years, often led the rosary before church, was a longtime CCD teacher and taught religion classes to migrant workers. He loved spending time with his family and grandchildren. When his kids were little, each summer he and Bernardine would load the car up and take the family on a vacation. In fact, he’s been to all 50 states. A skilled woodworker, he’s made toys and furniture for all the kids and grandkids as well. Jim was an avid reader and collector of books and especially liked Sherlock Holmes. He was also an actor at heart. A founding member of the Batesville Actors Theater, he acted for years and later would handle the production and lighting duties. He served as a Cub Scout Leader, 4H leader and family photographer. According to his family, Jim had a wonderful sense of humor and was a bit of a jokester, liked old movies and classical music in addition to a good single malt scotch. He is survived by his wife Mary Bernardine; daughters Mary (Michael) Trenkamp of Enochsburg, Anne (Gary) Schebler of Batesville, Margaret (Howard) Shipman of Madison, Indiana, Susan Mack of Warsaw, Indiana; sons Joseph (Judy) Mack of Greensburg, Peter (Deborah) Mack of Batesville, Thomas (Mary) Mack of Lafayette, Indiana, Timothy (Debbie) Mack of Greensburg, William Mack of Alliance, Ohio and 17 grandchildren. In addition to his parents, he is also preceded in death by his son David Mack. Visitation is Saturday, February 9th, from 9 – 11 a.m. at the funeral home. A funeral mass will follow at 11:30 a.m. at St. Catherine of Siena Church St. Maurice Campus in Decatur County with Rev. Stan Pondo officiating. Burial will follow in the church cemetery with military graveside rites conducted by the Prell-Bland American Legion Post #271 and the Ripley County V.F.W. Post #3183. The family requests memorials to St. Louis School or the American Diabetes Association.

The family of James A. Mack created this Life Tributes page to make it easy to share your memories.

Send flowers to the Mack family.