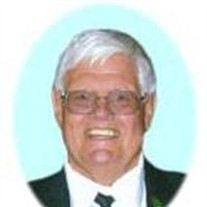 James F. Wintz, age 60 of Batesville, died Saturday, October 9, 2010, at Margaret Mary Hospital. Born March 3, 1950 in Batesville, he is the son of Ruth (Nee: Westmeyer) and Francis Wintz. He married Kathy Harmeyer November 13, 1976 at St. Mary’s of the Rock Church in St. Mary’s, Indiana. In 2009 he retired as Production Scheduler from Hill-Rom after 40 years with the company. He was a member of St. Louis Church, Knights of Columbus Council #1461 and a retired firefighter of the Batesville Volunteer Fire Department, having served 25 years.Jim’s size made him kind of an imposing figure, but those who knew him knew he was soft hearted and willing to help in any way he could. Jim liked sports. He enjoyed golfing and like many of us, he was a dedicated hacker. He followed the Reds and Bengals and for years played on the Weberding softball team. Jim was an easy going person who liked to have fun. Whether you’ve been the target of one of his pranks or the recipient of a gag gift, countless family and friends have been touched by his sense of humor. Kathy and the girls talked about his love for Christmas. He truly enjoyed the season, especially decorating the house. For many years he played Santa Claus around town in addition to family functions. They also remember him on the mower with his headphones on. Yard work wasn’t a chore, but something he looked forward to doing. Getting in the car to go for a ride was another of Jim’s favorite pastimes. The family laughed when they recalled how he used that hobby to keep an eye on Stephanie. Being the first daughter, he often followed her around after she got her driver’s license to make sure she was being safe. While he treasured his dog and cats, his real passion was his family. Kathy and the girls were precious to him and Jim was willing to do anything he could for them.He is survived by his wife Kathy, daughters Stephanie Hammond of Batesville, Beth Fleming of Greenwood, Indiana, Emily Wintz of Batesville; mother Ruth Wintz of Batesville; sister Mary Hershberger of Greenwood, Indiana and brother William Wintz, of Batesville. He is preceded in death by his father. Visitation is Tuesday, October 12th, from 4-8 p.m. at the funeral home. Funeral services are 11 a.m. Wednesday, October 13th at St. Louis Church followed by burial in the church cemetery. The family requests memorials to the Batesville Fire Department or the E.M.S. 10 Life Squad.

The family of James F. Wintz created this Life Tributes page to make it easy to share your memories.