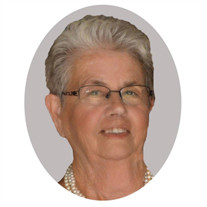 Jane C. Fullenkamp, age 80 of Oldenburg, died Friday, March 20, 2020 at her home. Born July 20, 1939 in Batesville, she is the daughter of Helen (Nee: Doll) and Louis Dietz. She married Edward Fullenkamp April 4, 1959 at St. Louis Church and worked behind the butcher counter at the Village Store for 20 years. Eddie preceded her in death October 28, 2006. After Eddie retired, he and Janie purchased an RV and traveled extensively. Although they traveled most of the country, many times they would head west and be sure to make a stop in San Diego to visit her brother. Janie enjoyed quilting, playing cards, going to bingo and in later years wintered in Florida. She is survived by daughters and son-in-laws Tami and Jeff Lamping of Oldenburg, Trisha and Kent Shively of Kokomo, Indiana; sons and daughter-in-laws Greg and Lisa Fullenkamp of Oldenburg, Doug and Tracy Fullenkamp of Oldenburg; grandchildren Josh Lamping, Mandy Lewis, Corey, Daniel and Eykis Fullenkamp, Anne Pratt, Andrew Shively, Lauren Shively and great grandchildren Corbyn and Chris Lewis, Eli, Sara, Rachel and Jayne Lamping, Brennan Kerker, Payton Fullenkamp, Jones and Charlie Pratt and McKinley Shively. In addition to her husband and parents, she is also preceded in death by her brother Robert Dietz. Due to the Governor’s mandate limiting gatherings to 50 people because of the Corona Virus pandemic, a private visitation and funeral service will be held for the immediate family on Thursday. Burial will be in Holy Family Cemetery. You are encouraged to go to www.weigelfh.com and leave a message for the family on Janie’s obituary page. The family requests memorials to the Charlie Pratt Medical Fund/Anne Pratt or the Holy Family Church Capital Improvement Fund and may be sent to Weigel Funeral Home, P.O. Box 36, Batesville, Indiana, 47006.

The family of Jane C. Fullenkamp created this Life Tributes page to make it easy to share your memories.

Send flowers to the Fullenkamp family.