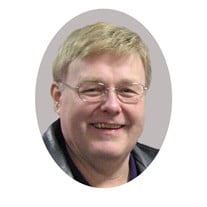 Jeffry D. Moorman, age 63 of Batesville, died Friday, July 27, 2018 at his home. Born September 17, 1954 in Batesville, he is the son of Evelyn (Nee: Davis) and Justin Moorman. He married Brenda Moenter June 21, 1975 at St. Louis Church in Batesville. Jeff worked alongside his dad at the family owned Batesville Roller Mill in his younger days. He was passionate about becoming a PGA golf professional and after graduating from Ball State University, he accomplished his goal. The day of his player’s ability test, his beloved Border Collie died, but Jeff was able to fight through and score high enough to pass and become a member of the PGA of America. It was a testimony to his grit and determination. He shared his love of teaching the game at clubs in Indiana, Wisconsin and Florida. Jeff also loved animals, especially his dogs and parrots, Walt Disney World, driving his red ‘Vette and made the best margarita’s ever! He is survived by his wife Brenda; sisters Cindy (Tom) Heidt of Versailles, Indiana, Steffanie Moorman of Schuylkill Haven, Pennsylvania; brother David (Nancy) Moorman of Sinking Spring, Pennsylvania as well as several nieces and nephews. In addition to his parents, he is also preceded in death by his niece Holli Moorman. Visitation is Wednesday, August 1st, from 5 – 7 p.m. at the funeral home. Funeral services are 10:30 a.m. Thursday, August 2nd at St. Louis Church with Rev. Alan Hirt officiating followed by burial in the church cemetery. Jeff was a very compassionate man who would want to share a darker side of his life to hopefully bring more awareness and hope to those suffering with a mental illness. He battled major depression and OCD for years. Brenda was continually learning new coping skills, but one day she got so annoyed with his antics that she said, “I would be worried about getting into heaven with that behavior if I was you.” Always having an answer for everything, he replied, “I’m not really worried about it. God made me this way and I am pretty sure he cares for me enough to fix me.” There are no quick fixes, but a contribution to the National Alliance on Mental Illness can help the afflicted and their loved ones have a better tomorrow.

The family of Jeffry D. Moorman created this Life Tributes page to make it easy to share your memories.

Send flowers to the Moorman family.