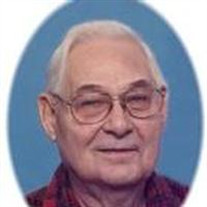 Jerome J. Weiler, age 92 of Morris, died Tuesday, September 24, 2013 at Manderley Health Care Center in Osgood. Born May 10, 1921 in Franklin County Indiana, he is the son of Mary (Nee: Zinser) and Frank Weiler. He married Marian Zins July 25, 1946 at St. Mary’s of the Rock Church in St. Mary’s, Indiana and she preceded him in death September 2, 2005. He was a farmer and a member of St. Anthony’s Church. Jerome didn’t have a lot of hobbies. A hard working individual, staying busy on the farm was in many ways his pastime. He did however love to spend time fishing and enjoyed the simple pleasure being of being outdoors in the evenings sitting on the porch or in the driveway with Marian and mowing his grass. He was a fan of The Price is Right and Wheel of Fortune. According to his family, “Grandma’s fried chicken was a favorite of his” and a bowl of ice cream was daily ritual for as long they can remember. His grandchildren though, were his true passion.He is survived by his daughter Deb Inman of Morris; sisters Roberta Bauer of Shelbyville, Indiana, Marian Weiler of Cincinnati, Ohio; brother Vincent Weiler of Sunman, Indiana; three grandchildren and six great grandchildren. In addition to his wife and parents, he is also preceded in death by sisters Edna Weiler, Jeanette Richards, Dorothy Stegamiller, Rose Bauman and brothers Victor, Herbert, Clifford and Donald Weiler. Visitation is Monday, September 30th, from 4 – 7 p.m. at the Weigel Funeral Home with a rosary service at 4 p.m. Funeral services are 10:30 a.m. Tuesday, October 1st, at St. Anthony’s Church in Morris with Rev. Frank Eckstein officiating. Burial will follow in the church cemetery with military honors conducted by the Batesville V.F.W. Post #3183 and the Prell-Bland American Legion Post #271. The family requests memorials to the Hospice of Margaret Mary Health.

The family of Jerome J. Weiler created this Life Tributes page to make it easy to share your memories.

Send flowers to the Weiler family.