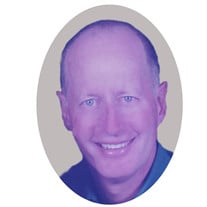 Jerry R. “Rut” Roell, age 63 of Batesville, died Saturday, April 14, 2018 at his home. Born July 26, 1954 in Batesville, he is the son of Dolores (Nee: Walke) and Elmer Roell. He married Jackie Rouse October 17, 1981 at St. Louis Church and was a mail carrier 30 years, retiring in 2014. Rut had four passions: his grandchildren, the outdoors, sports and the Green Bay Packers. Jackie and Rut loved camping and hiking. Many of their hiking trips were to national parks throughout the country with Red River Gorge in Kentucky a favorite. He was also a huge Packers fan. He and Jackie made several trips to Lambeau Field, the most recent last September, to watch a thrilling overtime win against Cincinnati. Rut coached boy’s and girl’s junior high basketball at St. Louis School for twenty two years, compiling a record of 398 wins and 184 loses. He served as a youth baseball coach and baseball board member for ten years as well as seven years on the Oldenburg Academy Oasis Athletic Board. Along with being an avid I.U. fan, Rut also attended four Super Bowls and three Final Fours. His greatest pleasure though, was playing games with his grandchildren. He is survived by his wife Jackie; daughter Jessica Roell of Batesville; son and daughter-in-law Jeremy and Amanda of Brownsburg, Indiana; sisters Mary Roell of Huntington Beach, California, Pat Meer of Batesville; brothers Louis, Carl and Stan, all of Batesville, as well as his grandchildren Preston Conway, Kendall Hoff, Whitney Hoff and Margaret and Evelyn Roell. He is preceded in death by his parents. Visitation is Wednesday, April 18th, from 4 – 7 p.m. at the funeral home. Funeral services are 10 a.m. Thursday, April 19th at St. Louis Church with Rev. Stan Pondo officiating. Burial will follow in the church cemetery. The family requests memorials to the St. Louis Athletic Department or the Oldenburg Oasis Athletic Club.

The family of Jerry R. 'Rut" Roell created this Life Tributes page to make it easy to share your memories.