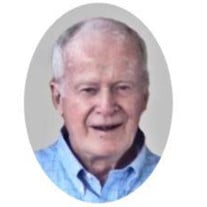 John P. “Jake” Hill, 92, beloved father and grandfather, died Monday, February 21, 2022, in Fairfield, Connecticut, after a brief illness. Born to Arthur S. and Teresa (Furey) Hill, Jake grew up in Arlington, Massachusetts. Winters were spent playing ice hockey with his two older brothers, Arthur and Dick, and summer days were passed happily on the annual family vacation in Hampton Beach, New Hampshire. He developed a lifelong love of sailing and taught sailing at the Pleasant Bay Camp in Cape Cod as a teen. After graduating from Arlington High School, Jake went to Boston University and studied Political Science and History; his interest in these subjects never waned as he always had a history book within arm’s reach. While at BU, he joined the rowing team and was a valued member of the Varsity 8+; he passed his love of that sport on to three of his grandsons. After college, Jake served as a 1st Lieutenant in the Army (9th Field Artillery Battalion, 3rd Infantry Division) in Korea from 1951-1954. Upon his discharge, he began his career in sales and marketing at Armstrong Cork Company. While living in Cincinnati, he had the immense good fortune of meeting Sue Hellmich; they married in Batesville, Indiana, in 1959 and spent 48 loving years together. Jake was assigned to district offices in Providence, Kansas City, Boston, and Buffalo before finally settling in Lancaster, Pennsylvania, in 1966. He retired from Armstrong after 36 years of service. Shortly thereafter, he was named President of Endura Rubber Flooring, a division of the Biltrite Corporation, in Waltham, Massachusetts. He retired in 1998. Jake took great pleasure in spending time in Ocean City, New Jersey, and on Cape Cod, listening to jazz, exploring marinas and Civil War battlefields, having breakfast at a diner, going to the movies with his dear neighbors, taking a long walk with the dog, and he never turned down a good piece of pie. Jake and Sue traveled extensively after his retirement, particularly enjoying time spent in Italy and France. However, their most cherished roles were as “Mumma and Papa Jake”, visiting their children and grandchildren and cheering them on at every sporting event and school assembly. Papa Jake (or “PJ”, for short) entertained us all with his unique turn of phrase and his impressive vocabulary. He was always the MVP of family game nights. After Sue’s death, Jake rekindled a friendship with Loraine (Tucker) Kessler, a fellow graduate of Arlington High School. They married in 2011 in Miami. Jake and Loraine shared a love of travel and were always on the go. During this time, Jake was an enthusiastic fan on the riverbanks at countless regattas watching his grandsons—his “sturdy oarsmen”—compete on the water. With Loraine’s passing in 2017, Jake relocated to Connecticut to be near family. He was a much-loved resident at Split Rock Assisted Living in Shelton. The family wishes to express their gratitude for the loving support and care that he received from the community there. Dad was unfailingly kind, wickedly funny, and intellectually curious to the end. He was a true gentleman. With his quiet strength and unwavering good nature, Dad set a beautiful example for all of us. We will miss him dearly. Jake is survived by his three children, Sara (Bill) Wallace of Fairfield, Connecticut; Nancy Hill of Tustin, California; and John (Kristen) Hill of Cedarburg, Wisconsin. He is also survived by six grandchildren, Jack Wallace of Dallas, Texas; Kit Wallace of New York, New York; Rob Wallace of Denver, Colorado; John Hill and Henry Hill, both of Austin, Texas; and Natalie Hill of Cedarburg, Wisconsin. Many nieces and nephews also survive Jake. A graveside service will be held 11 a.m. on Saturday, May 14th at St. Louis Cemetery where his cremains will be interred. Rev. Stan Pondo will officiate. In lieu of flowers, contributions may be made in Jake’s memory to the American Parkinson Disease Association (https://www.apdaparkinson.org) or the Korean War Veterans Memorial (https://koreanwarvetsmemorial.org).

The family of John P. "Jake" Hill created this Life Tributes page to make it easy to share your memories.

Send flowers to the Hill family.