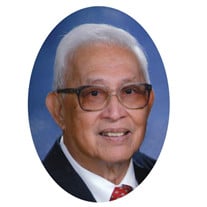 Jose G. Garcia, age 84 of Batesville, passed away on November 22, 2020 at The Chateau of Batesville. He was born December 24, 1935 in Santo Tomas, La Union Province, in the Philippines, the son of Flora (Nee: Geneta) and Francisco Garcia. He was married to his first wife Marieta Ciriaco, from April 20, 1961, until her death in 1969. He later remarried Gemma Gonzales on April 22, 1974. Jose was educated at the Mapua Institute of Technology at Manila in the Philippines and received a Bachelor of Science degree in Civil Engineering in 1955. After graduation, he worked as a Civil Engineer for the Philippine Government until he emigrated from the Philippines to the United States in 1971. He worked for the Indiana Department of Transportation for nearly 30 years as a Construction Project Engineer then later as a Traffic Engineer before retiring in 2003. Jose was a devout Catholic and a longtime member of St. Louis Parish. During his free time, he enjoyed spending time with his grandchildren, watching baseball and game shows. In addition to his wife Gemma, he is survived by his daughter Monina Baker of Hartford, Connecticut; sons Joselito (Annette) of Whitefish Bay, Wisconsin, Jaime (Imelda) of Kent, Washington, Joel (Arlene) of Batesville, Joseph of Batesville; brothers Dr. Romulo Garcia and Dr. Manuel Garcia, both of Hernando, Florida, Alejo Garcia of Wake Forest, North Carolina and grandchildren Jeffrey Garcia, Emily Garcia, Jeremy Garcia, Jason Garcia, Isabella Garcia, Amanda Garcia, Justin Garcia and Megan Baker. In addition to his wife Marieta and parents, he is also preceded in death by his son Jorge Garcia and sister Thelma Manauis. Due to the current Governor’s mandate restricting gatherings, a private visitation and funeral service will be held on Saturday, November 28th with Rev. Santhosh Yohannan officiating. The service will be live-streamed and can be seen starting at 10:30 a.m. on Saturday by going to Jose’s obituary page at www.weigelfh.com and clicking the link “Photos and Videos”, then clicking the arrow on his picture. Burial will be in St. Louis Cemetery. In lieu of flowers, the family requests memorials to St. Louis School or the Margaret Mary Health Foundation Hospice.

Jose G. Garcia, age 84 of Batesville, passed away on November 22, 2020 at The Chateau of Batesville. He was born December 24, 1935 in Santo Tomas, La Union Province, in the Philippines, the son of Flora (Nee: Geneta) and Francisco Garcia. He... View Obituary & Service Information

The family of Jose G. Garcia created this Life Tributes page to make it easy to share your memories.

Jose G. Garcia, age 84 of Batesville, passed away on November...

Send flowers to the Garcia family.