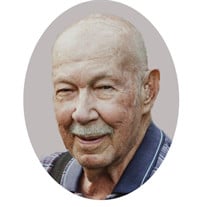 Joseph E. Lambert, age 91 of Batesville, died Wednesday, December 18, 2019 at his home. Born May 14, 1928 in St. Nicholas, Indiana, he is the son of Sophia (Nee: Hausman) and Clarence Lambert. He served in the Army during the Korean War. Following the service, he would work at Batesville Casket Company as an assistant foreman 38 years before retiring in 1993. He married Bernice Hoog September 2, 1957 at St. Louis Church and was a member of the Ripley County V.F.W. Post #3183 and the Batesville Eagles Club Aerie #1130. Many will remember Joe from his two passions, four wheeling and old tractors. He was able to share his love of four wheeling with his sons and grandchildren, often going on outings with them. This was something he was able to do and enjoy even into the first part of this year, at the age of 91. Joe also collected old tractors, taking part in parades, tractor shows and power of the past shows throughout the area. He was a member of the Pioneer Engineers Club in Rushville and a regular at their annual event. Joe liked camping as well, which was another hobby he shared with his family. Although he didn’t have a favorite team, he enjoyed watching football in addition to being an avid Euchre player. His family noted his fondness for chewing tobacco and that his nickname was “Mr. Fix It.” Apparently, there wasn’t anything he couldn’t fix. People were always dropping items off and Joe typically had it repaired and returned them back to them with little to no delay. He is survived by his wife Bernice; daughter ans son-in-law Judy and Bob Bordner of Niceville, Florida; sons and daughters-in-law Gene and Wende Lambert, Tim and Marianne Lambert and Dale and Julie Lambert, all of Batesville; nine grandchildren and six great grandchildren. In addition to his parents, he is also preceded in death by sisters Marceda Eckstein, Ruth Springmeyer and brother John Lambert. Visitation is Sunday, December 22nd, from 12 – 3 p.m. at the funeral home. Funeral services are 10 a.m. Monday, December 23rd at St. Louis Church with Rev. Stan Pondo officiating. Burial will follow in the church cemetery with military rites conducted by the Ripley County V.F.W. Post #3183 and the Prell-Bland American Legion Post #271. In lieu of flowers, the family requests memorials to Hospice or the Pioneer Engineers Club.

Joseph E. Lambert, age 91 of Batesville, died Wednesday, December 18, 2019 at his home. Born May 14, 1928 in St. Nicholas, Indiana, he is the son of Sophia (Nee: Hausman) and Clarence Lambert. He served in the Army during the Korean War.... View Obituary & Service Information

The family of Joseph E. Lambert created this Life Tributes page to make it easy to share your memories.

Send flowers to the Lambert family.