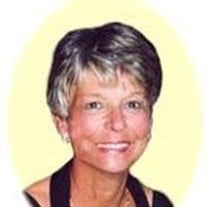 Juna D. Wainscott, age 70 of Batesville, died Friday, May 16, 2014 at Margaret Mary Health. Born August 15, 1943 in Covington, Kentucky, she is the daughter of Evelyn (Nee: Gaddis) and Charles McElfresh. A homemaker for many years, she also worked as airport security at the Greater Cincinnati-Northern Kentucky Airport for over 10 years. Juna began bowling at an early age. Doing something she loved with friends turned into a 40 plus year hobby as a league bowler before giving it up several years back. Other interests included playing scrabble, working crossword puzzles, following the Cincinnati Reds and playing tennis when she was younger. Her children teased about her lack of gourmet cooking skills and the fact that she liked soap operas. They were most proud of their mom's fighting spirit. Juna endured numerous health issues over her lifetime including a brain aneurism, ruptured appendix and an aortic aneurism. No matter what she faced, Juna was always a forward thinker, remained positive, and was willing to do what was needed to return back to good health. Even the recent discovery of Leukemia found her ready to tackle it head on. She is survived by her daughters Julie (Mike) Tekulve of Oldenburg, Debbie (Dana) Gregg of Sunman, Susanne (Ben Day) Warner of Park Hills, Kentucky; son Jerome (Paula) Warner of Morris; sisters Erlene Barndt, Linda Anderson, Marita Spencer, Sherri McElfresh, Kim Mullins; brothers Tony, Roger, David and Danny McElfresh; eighteen grandchildren and three great grandchild. In addition to her parents, she is preceded in death by her brother Mack and one grandson. Visitation is Monday, May 19th, from 4-7 p.m. at the funeral home with a rosary service at 4 p.m. Funeral services are 11 a.m. Tuesday, May 20th, at St. Nicholas Church near Sunman with Rev. Shaun Whittington officiating. Burial will follow in the church cemetery. The family requests memorials to St. Nicholas School.

Juna D. Wainscott, age 70 of Batesville, died Friday, May 16, 2014 at Margaret Mary Health. Born August 15, 1943 in Covington, Kentucky, she is the daughter of Evelyn (Nee: Gaddis) and Charles McElfresh. A homemaker for many years, she also... View Obituary & Service Information

The family of Juna D. Wainscott created this Life Tributes page to make it easy to share your memories.

Send flowers to the Wainscott family.