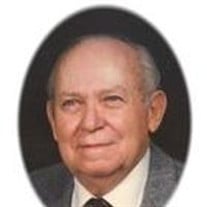 Lawrence N. “Buddy” Voegele, age 90 of Batesville, died Monday, February 22, 2010 at St. Andrew’s Health Campus in Batesville. Born January 26, 1920 in Ripley County Indiana, he is the son of Margaret (Nee: Martin) and William Voegele. He married Altarose Riehle May 28th, 1946 at St. Anthony’s Church in Morris, Indiana. Buddy served in the army’s 44th Infantry Division during World War II seeing extensive action in Central Europe, Germany and Italy where he earned four bronze stars and the distinguished unit badge. After the service, he spent 47 years as office manager of The Romweber Company before retiring in February 1982. He was a member of St. Louis Church, Batesville V.F.W. Post #3183 and a member of the Knights of Columbus Council #1461 for over 50 years.With the exception of bowling, Buddy’s interests typically led him outdoors. He enjoyed pitching horseshoes, as well as hiking and camping with family and friends. In later years he developed a fondness for golf. Having a passion for travel, Buddy and Altarose were able to visit all 50 states in addition to a tour of Europe and celebrated their Golden Anniversary on a cruise through the Panama Canal.He is survived his wife Altarose; daughters Carol Baker of Sunman, Indiana, Nancy Metz, Linda Riggs and Janet Meer, all of Batesville; son Ronald of Martinsville, Indiana; sisters Ruth Simmermeyer of South Bend, Indiana, Clare Irrgang of Batesville; brother Tony of Batesville; six grandchildren and seven great grandchildren. In addition to his parents, he is also preceded in death by sister Louise Voegele and brothers James, Dan, Paul, William, Louis and Martin. Visitation is Thursday, February 25th, from 4-7 p.m. at the funeral home with a rosary service at 6 p.m. Funeral services are 10 a.m. Friday, February 26th, at St. Louis Church and burial will follow in the church cemetery with military graveside rites conducted by the Batesville V.F.W. Post #3183 and the Prell-Bland American Legion Post #271. The family requests memorials to St. Andrew’s Activity Fund.

The family of Lawrence N. "Buddy" Voegele created this Life Tributes page to make it easy to share your memories.