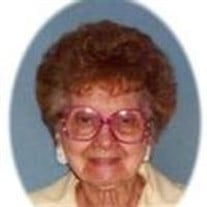 Margaret Elizabeth Walke, age 96 of Batesville, Indiana, died Friday, December 24, 2010 at The Waters of Batesville. Born November 21, 1914 in Lawrenceville, Indiana, she is the daughter of Florence (Nee: Reed) and Joseph Bulach. She married Ernest J. Walke Sr. May 15, 1943 at St. Peter’s Catholic Church in St. Peter’s, Indiana and he preceded her in death on May 14, 1995.Margaret moved to Cincinnati at the age of 16 to work in a private home. It was there that she started to acquire her excellent cooking skills. After moving back to Lawrenceville, she started working as a waitress at the Sherman House in Batesville where she met her husband Ernie. Margaret was famous throughout the area for her delicious pies and in fact was known as “the pie lady”. But it wasn’t just her pies; she was an all-around great cook. She and Ernie owned and operated The Ship restaurant and tavern from the mid-1950s to the early 1970s. After retiring from The Ship, Margaret did catering and cooked at the Batesville V.F.W. on Fridays. She hung up her apron at age 90.Margaret was a very active member of the Batesville V.F.W. Post #3183 and Prell-Bland American Legion Post #271 Ladies Auxiliaries. She also was a member of the Knight’s of St. John and the Eagle’s Aerie #1130 Ladies Auxiliaries. She loved to bowl, was an avid reader in her later years and Elvis Presley had a special place in her heart. She often received Elvis memorabilia as gifts. Gambling was also a favorite activity of hers, especially the casino boats and lottery tickets. Her greatest pleasure was spending time with her grandchildren and spoiling them.She is survived by daughters Linda Forman (Jim Burton), Lea Bultman, Sandra Labarbera (Tom), all of Columbus, Indiana, Margie Walke of Batesville; son Ernest Walke Jr. (Connie) of Osgood, Indiana; six grandchildren, nine great grandchildren and one step great grandchild. In addition to her husband and parents, she is preceded in death by sisters Marie Hoog, Dorothy Bulach and brother Joseph Bulach.Visitation will be held Tuesday, December 28th, from 4 – 8 p.m., at the funeral home, with a rosary service at 3:30 p.m. Funeral services are 10 a.m. Wednesday, December 29th at St. Louis Catholic Church in Batesville, with Rev. Randy Summers officiating. Burial will follow in the church cemetery. Memorials may be made to the V.F.W. Relief Fund and St. Louis Tuition Angels.

The family of Margaret Elizabeth Walke created this Life Tributes page to make it easy to share your memories.

Send flowers to the Walke family.