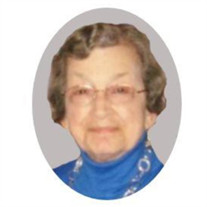 Mary Ann Siefert, age 92 of Batesville, gained her angel wings on April 28, 2020. Born December 11, 1927 in Morris, Indiana, she is the daughter of Therese (Nee: Riehle) and Martin Prickel. The young farm girl married Jerome “Jake” Siefert on June 21, 1952 at St. Anthony of Padua Church in Morris, and he preceded her in death on April 18, 1999. She retired from the Hill-Rom Company and began to travel with Jake, visiting her daughters and their families along the way. Those who knew Mary Ann knew how much she enjoyed family gatherings, tending to her flower and vegetable gardens and chatting on the breezeway with visiting friends and neighbors. She and Jake started their family with twin girls, another daughter arrived eighteen months later, and another eight years later -- she had her hands full but excelled as a mama with all her daughters. Mary Ann volunteered at St. Louis parish and school, and at the former Hospitality Hall, and was a member of the Red Hat Belles and Surviving Spouses Dinner Club. When her twins left for college, Mary Ann decided to accept a job working in the upholstery area, and later in the wiring department of Hill-Rom. This venture provided a wealth of great friendships that lasted into her retirement. Holidays with family gathered were her favorite times, and she treasured the addition of each son-in-law, grandchild and great-grandchild … and was thrilled when another set of twins arrived among the great-grandchildren. When asked what she would miss the most, she replied, “Seeing my greats grow up.” Following Jake’s death, Mary Ann began to downsize her household and made the decision to move to St. Andrews at age 91. She thrived in the assisted living environment and thoroughly enjoyed the residents and activities and praised their caring staff members. She came into the world surrounded by the love of family at the Prickel farm on Lammers Pike and entered her eternal life “just down the road a bit,” at St. Andrews, surrounded again by the love of family. Mary Ann is survived by her daughters Jean (Jeff) Beckley of Carmel, Indiana; Jane (Jim) Nordmeyer of Monclova, Ohio; Peggi (Von) Shipman of Valdosta, Georgia; and Sue Siefert of Batesville. She was most proud of her grandchildren, James Beckley, Sarah Nordmeyer, Jacque Beckley (Brad) Smith, Eric (fiancée Mary Bajic) Nordmeyer, John Nordmeyer, Jenna Beckley (fiancée Jason Bates) and Jordan Beckley, her two step-grandchildren, Chris and Katie Shipman, and her precious great-grandchildren, Tyler, Graham and Lyla Smith, and Jacob and Addison Nordmeyer. In addition to her husband and parents, she is also preceded in death by an infant daughter, Mary June, a sister, Helen Wettering and a brother, Leonard Prickel. Due to COVID-19 precautions, a drive-thru viewing will be held Saturday, May 2 from 9:30-11:00 at the Weigel funeral home. Private graveside service will be held at St. Louis Cemetery. Later, when conditions permit, a celebration of her life will be held. The family requests paying it forward to memorialize Mary Ann – consider volunteering or contributing to a food or blood bank, helping a neighbor in need during this time of isolation, supporting the first responders, truckers, grocery workers or healthcare workers with an act of kindness. Memorials donations may be made to the Sisters of St. Francis or the St. Andrew’s Activity Fund and mailed to Weigel Funeral Home, P.O. Box 36, Batesville, Indiana, 47006.

The family of Mary Ann Siefert created this Life Tributes page to make it easy to share your memories.

Send flowers to the Siefert family.