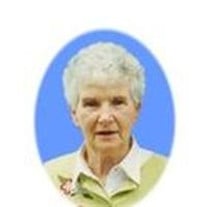 Millie F. Ziegler, age 83 of Batesville, died Tuesday, July 29, 2008, at Ripley Crossing in Milan. Born July 30, 1924 in Waterbury, Connecticut, she is the daughter of Mary (Nee: Burke) and James Sharkey. She married Matthew Ziegler Sr. August 16, 1947 at St. Joseph’s Church in North Bend, Ohio and he preceded her in death on July 23, 1981.Millie served in the Navy during World War II, serving in the Pacific Theater while stationed at Pearl Harbor in 1944 and 1945. She was a member of St. Anthony’s Church in Morris, the Batesville V.F.W. Post #3183 and for 10 years a member of the Society of Our Lady. Millie was very devout and church was important to her. Each Christmas, she looked forward to the Live Nativity held at St. Anthony’s, which her son Bob has participated in for years. Millie also enjoyed many interests. She liked to go dancing on Saturday nights in her later years and to stay fit, she roller skated and jumped rope until the age of 70. She was an avid reader and also kept regular correspondence with her family the old fashioned way …….. using a typewriter. Millie’s true passion was being an advocate of the less fortunate. She was often found organizing the collection of food and clothing to be distributed to those in need.She is survived by her daughters Peggy Ziegler of Cincinnati, Ohio, Mary Ziegler of Batesville; sons Robert Ziegler of Batesville, Daniel Ziegler of Sunman, Indiana, William Ziegler of Columbus, Indiana, Charles Ziegler of Batesville; sister Emma Lou Wilkas of Waterbury, Connecticut; grandchildren Tim Brown, Eric Brown, Amy Watson, Angela Ziegler, Nicole Lehr, Allison Ziegler, Brandon Ziegler, Jason Ireland, Jesse Hornberger, Jake Ireland and great grandchildren Kirsten Ziegler, Karsyn Watson, Alexis Ireland, Brock Ireland and Ethan Ireland. In addition to her husband and parents, she is also preceded in death by sons Patrick and Matthew Ziegler Jr.; sister Margaret McNellis and brothers James, John, Thomas and William Sharkey.Visitation is Friday, August 1st, from 4-8 p.m. at the funeral home. Funeral services are 11 a.m. Saturday, August 2nd, at St. Anthony’s Church with Rev. Bernard Varghese O.F.M., officiating. Burial will be in the church cemetery with military graveside rites conducted by the Batesville V.F.W. Post #3183 and the Prell-Bland American Legion Post #271. The family requests memorials to the Ripley Crossing Activities Fund or the Southeastern Indiana Alzheimer’s Support Group.

The family of Millie F. Ziegler created this Life Tributes page to make it easy to share your memories.

Send flowers to the Ziegler family.