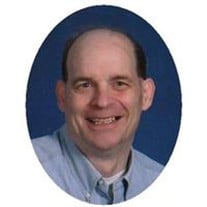 Nathan J. Wissel, age 55 of Batesville, died Friday, March 25, 2016 at his residence.  Born December 25, 1960 in Rushville, Indiana, he is the son of Elvera (Nee: Harpring) and Harvey Wissel Jr.  He worked at Batesville Casket Company 11 years before retiring in 1989.   26 years ago Nathan suffered a stroke after having epilepsy surgery and as a result, communicating became difficult.  It was during this transition that he came to love music, as he could still sing. Along with music, he also had great passion for dancing and looked forward to attending events where he could.  It helped provide a way to express himself and allowed him to experience the return of some of the normalcy to his life that he'd lost.  His family described him as a gentle soul who was always willing to help others.  Some of his interests included watching Wheel of Fortune, Jeopardy, In The Heat of The Night reruns, history programs, especially war documentaries, as well as being an IU fan.  Nathan though, typically preferred to stay busy, so he enjoyed spending time out working in the yard and took daily walks.  A former wrestler, he was diligent about eating right and staying in shape.  What he loved most was being with family at gatherings, functions and holidays.   He is survived by his mother Elvera of Batesville; sisters Monica Hooten, Alyssa Wissel and Sheila Kieffer; brother Matthew, all of Batesville and several nieces and nephews.  In addition to his father, he is also preceded in death by his brother Damien.   Visitation is Tuesday, March 29th, from 4 - 7 p.m. at the Weigel Funeral Home.  Funeral services are 11 a.m. Wednesday, March 30th, at St. Anthony's Church in Morris with Rev. Sean Danda officiating.  Burial will follow in the church cemetery.  The family requests memorials to Margaret Mary Health Foundation Hospice (https://www.mmhealth.org/donate.html) or St. Anthony's Cemetery Fund.

The family of Nathan J. Wissel created this Life Tributes page to make it easy to share your memories.