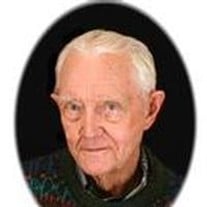 Norman A. “Pete” Wanstrath, age 86 of Batesville, died Wednesday, March 2, 2011 at St. Andrew’s Health Campus. Born March 25, 1924 in Batesville, he is the son of Johanna (Nee: Bramlage) and Theodore Wanstrath. He married Rita Jane Gehring August 21, 1948 at Holy Family Church in Oldenburg and she preceded him in death May 26, 2009. Pete served in the Navy during World War II on an LST (landing ship tank) used to launch amphibious vessels and their crew onto beach heads. Pete was proud of his Navy service and kept in regular contact with his Navy buddies. Returning home from the service, he joined the family business and became co-owner and operator of the New Point Stone Company for nearly 50 years before retiring. Pete was a member of St. Louis Church, the Batesville V.F.W. Post #3183, the Prell-Bland American Legion Post #271 (where he was the longest tendered member), the Knights of Columbus Council #1461 as a 4th Degree Knight and Hillcrest Country Club. He was a former Chairman of the Batesville Planning and Zoning Board and former Chairman of the Board of the Batesville State Bank. His family laughed when the word retirement came up. Pete never fully retired. It did provide him the opportunity though to spend more time doing the things he loved. After “retirement” he enjoyed taking the grandkids fishing. An avid sports fan, he liked watching sports on T.V. and followed the Cincinnati Reds and I.U. basketball. He also liked to golf, for many years bowled in a couple of leagues and even up until last summer was pitching horseshoes in a local league. In his younger days he enjoyed going to the horse races and for a time was a thoroughbred owner. He and Rita Jane were able to travel quite a bit over the years at home and abroad and count trips to Hawaii, Australia and Germany among their favorites. When it got cold, he would to travel to Florida with his friends to keep their golf games sharp over the winter. He is survived by daughters and son-in-laws Lu Ann and John Zeszut of Cincinnati, Jan and Terry Carlson of Ft. Myers Beach, Florida, Julie and Bob Jackson of Dayton, Ohio; sons and daughter-in-laws Ken and Deborah Wanstrath, Randy and Carolyn Wanstrath, Russ and Jama Wanstrath, Jim Wanstrath, all of Batesville; sister Dorothy Oliger of Greensburg; 14 grandchildren and nine great grandchildren. In addition to his wife and parents, he is also preceded in death by his son Glenn and brother Louis Wanstrath. Visitation is Friday, March 4th, from 4-7 p.m. at the funeral home. Funeral services are 10 a.m. Saturday, March 5th, at St. Louis Church. Burial will follow in the church cemetery with military rites conducted by the Batesville V.F.W. Post #3183 and the Prell-Bland American Legion Post #271. The family request memorials to the Batesville Youth Baseball/Softball Complex fund or St. Louis School Tuition Angels.

The family of Norman A. "Pete" Wanstrath created this Life Tributes page to make it easy to share your memories.