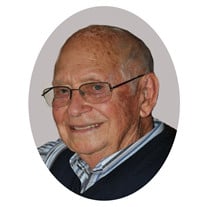 Omer F. “Pee Wee” Kinker, age 90 of Greensburg, died Saturday, September 1, 2018 at Aspen Place in Greensburg. Born November 25, 1927 in Decatur County Indiana, he is the son of Anna (Nee: Duvelius) and Harry Kinker. He married Rita Niese January 19, 1957 at St. Louis Church in Batesville and she preceded him in death April 7, 2002 after 45 years of marriage. Pee Wee was a farmer as well as a truck driver for the Hill-Rom Company 36 years. He served in the army during the Korean War, driving supply trucks to the front line under the cover of darkness. When asked about his hobbies, his family responded, “work.” He was one of those individuals that stayed busy. In addition to working for Hill-Rom he also raised feeder pigs and ran the family farm. Pee Wee also liked time in the woods where he would usually be chopping wood, coon hunting or mushroom hunting. A Reds fan, his family also indicated he liked the Bengals, but could root for the Colts too, depending on who was in the room or which team was winning. Pee Wee was also known for his homemade horseradish. He is survived by daughters Jean (Steve) Lynch of Laurel, Indiana, Nancy (Gene) Wallpe of Greensburg, Patty (Mark) Kohrman of Sunman, Mary Land (partner Kenneth Foster) of Greensburg; sons Mike (Judy) Kinker, Jerry (Connie) Kinker, Steve (Gretchen) Kinker, all of Greensburg; sisters Loretta Kinker of Greensburg, Julie Pumphrey of Columbus, Indiana, Rosemary Cook of Batesville; brother Louis Kinker of Greensburg; 25 grandchildren and 30 great grandchildren with two more on the way. In addition to his wife and parents, he is also preceded in death by sisters Virginia Heck, Margaret Mollaun, Leona Moeller; two grandchildren and one great grandchild. Visitation is Tuesday, September 4th, from 4 – 7 p.m. at the funeral home. Funeral services are 10 a.m. Wednesday, September 5th, at St. Catherine of Sienna Church in Enochsburg with Rev. Bill Ehalt officiating. Burial will follow in the church cemetery with military honors conducted by the Ripley County V.F.W. Post #3183 and Prell-Bland American Legion Post #271. The family requests memorials to Our Hospice of South Central Indiana or the Wounded Warrior Project.

The family of Omer F. "Pee Wee" Kinker created this Life Tributes page to make it easy to share your memories.

Send flowers to the Kinker family.