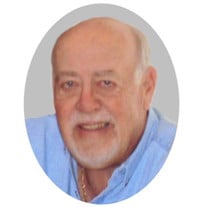 Paul R. Ollier, age 85, of Viera, Florida, died Sunday, January 30, 2022, at his residence. Born November 18, 1936, in Batesville, Indiana, he is the son of Rose (Nee: Erne) and Raymond Ollier. Paul served in the U.S. Navy and was issued an honorable medical discharge due to an injury he sustained on the USS Remora, a naval submarine. Paul married Mary Ann Bohman on November 22, 1962, at St. Louis Church in Batesville. After working 35 years in the dental industry in Dayton, Ohio, Paul retired in December 1996 and moved to Florida after Mary Ann retired from nursing in 2005. As an avid sports enthusiast, Paul enjoyed almost every sport (even swimming). While his heart and soul gravitated toward athletics, his passion was investments. That is where his initials “PRO” truly personified him. In addition, he thoroughly enjoyed the arts, including theater, architecture, cinema, music, sculpture, and literature (especially “Morningstar”). Speaking of music, as a child, Paul’s notorious “God Voice” had not developed yet, and he sang soprano in the boys’ choir. As an adult and member of St. John’s Catholic Church, he also sang in the choir but not with such an angelic pitch, given his manly bass transformation. Another true love of Paul’s was his immediate family as well as his extended “Bohman Clan.” Being an only child, Paul felt blessed to inherit three sisters and a brother (plus their spouses, children, grandchildren, etc.) In fact, on numerous occasions, he mentioned that out of all the vacations he had been on in his life, the Mediterranean cruise was the crowning jewel. In spite of the fact that he was lost for four hours in Florence, terrifying the rest of his family with the thought that he had been kidnapped and/or murdered, he cherished the time with his “Happy Pappy (wheelchair) Pushers.” Paul is survived by his wife/his private duty nurse Mary Ann: daughters Debbie Towe and Karen Ollier; son-in-law Chuck Towe; five grandchildren: David Towe (and wife Yvette Towe), Jon Towe, Raychel Santo (and husband Homer Smith), Jamie Towe, Grant Santo; four great-grandchildren: Connor Towe, Hypatia Santo, Camden Towe, Helaine Santo. A memorial mass was held at Saint John the Evangelist Catholic Church in Viera, Florida on April 20, 2022. A memorial mass in Batesville will be held at St. Louis Catholic Church at 2:00 PM on Wednesday, April 27, 2022, with a celebration of life immediately following at the Knights of Columbus Hall in Batesville, where Paul’s circle of life began 85 years ago.

The family of Paul R. Ollier created this Life Tributes page to make it easy to share your memories.

Send flowers to the Ollier family.