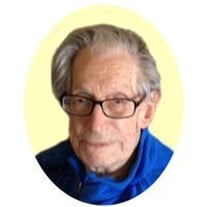 Ralph J. Wagner, age 94 of Oldenburg, Indiana, died Sunday, April 5, 2015 at his residence. Born February 27, 1921 in Oldenburg, he is the son of Magdalena (Nee: Ebner) and Peter Wagner. Ralph served in the army during World War II in Central Europe earning five bronze stars. He married Helen Riley on March 1, 1957 at Holy Family Church. They opened Wagner's Village Inn Restaurant in 1968 and ran it for 28 years before retiring in 1996. He was a member of Holy Family Church, the Batesville V.F.W. Post #3183 and the Prell-Bland American Legion Post #271. Ralph loved golf. An avid player, he also watched it on T.V. Helen said during golf season, "We watched it every Thursday, Friday, Saturday and Sunday." He also enjoyed bowling and was a league bowler for years with restaurant sponsoring Wagner's Hot Shots. A sharp and inquisitive mind, he worked the Jumble in the paper and having spent time as a jeweler, was always tinkering with his watch. He liked reading the newspaper, Reader's Digest and a devoted bird watcher, books on nature and birds as well. A Reds and Bengals fan, he could root for the Colts too. He and Helen enjoyed traveling and trips to the casino and liked to combine the two by visiting Las Vegas occasionally. He is survived by his wife Helen; daughters Ginger Saccomando, Beth Zawaski and Cathy Kerker, all of Oldenburg, Carol Heidlage of Batesville; 10 grandchildren and 14 great grandchildren. In addition to his parents, he is also preceded in death by his son William Alley; sister Margaret Brosnan and brothers Urban, Joseph and Al Wagner. Visitation is Wednesday, April 8th, from 9 - 11 a.m. at Holy Family Church. Funeral services follow at 11 a.m. with Rev. David Kobak O.F.M. officiating. Burial will be in the church cemetery with military rites conducted by the Batesville V.F.W and the Prell-Bland American Legion. The family requests memorials to Premier Hospice of Indiana.

Ralph J. Wagner, age 94 of Oldenburg, Indiana, died Sunday, April 5, 2015 at his residence. Born February 27, 1921 in Oldenburg, he is the son of Magdalena (Nee: Ebner) and Peter Wagner. Ralph served in the army during World War II in Central... View Obituary & Service Information

The family of Ralph J. Wagner created this Life Tributes page to make it easy to share your memories.

Send flowers to the Wagner family.