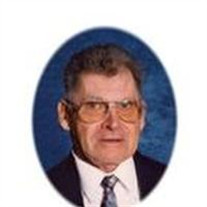 Ralph N. Werner, age 79 of Oldenburg, died Saturday, January 10, 2009 at the Shady Nook Nursing Home in Lawrenceburg, Indiana. Born January 31, 1929 in South Gate, Indiana, he is the son of Edna (Nee: Schuck) and Edward Werner. He married Anna Greiwe November 17, 1956 at Holy Family Church in Oldenburg and she preceded him in death on January 4, 1996.Ralph served in the army during the Korean War. After the service, he farmed for more than 40 years before retiring. Until later years when his health wouldn’t permit, he loved to hunt for deer, squirrels and rabbits as well as spending an afternoon fishing. Like most farmers, Ralph enjoyed going to auctions or flea markets always on the lookout for something useful or an unexpected “treasure”. In recent years, he replaced his loved of being outdoors hunting and fishing with soccer games, watching his grandchildren, as several of them excelled at the sport. His kids teased him that “there were two things you could count on with dad. He would have bread with every meal and he always cleaned his plate.”He is survived by his daughter Pam Swinford of Lawrenceburg; sons Ray of Morris, Indiana, Ralph of Peppertown, Indiana; sisters Dottie Gillman of Cincinnati, Ohio, Bette Oligee, Alean Saunders, both of Port Charlotte, Florida, Joan Fassler of San Antonio, Texas, Rosie Lohman of Harrison, Ohio, Mary Grace Bischoff of St. Leon, Indiana; brother Tom Werner of Port Charlotte, Florida; 13 grandchildren and three great grandchildren. In addition to his wife and parents, he is also preceded in death by daughters Patricia Keith, Paula Switzer and brothers Bob, James and Jerry Werner.Visitation is Tuesday, January 13th, from 4-8 p.m. at the funeral home with a rosary service at 7 p.m. Funeral services are 10 a.m. Wednesday, January 14th, at Holy Family Church in Oldenburg. Rev. David Kobak O.F.M., will officiate and burial will be in the church cemetery with military graveside rites conducted by the Batesville V.F.W. Post #3183 and the Prell-Bland American Legion Post #271. The family requests memorials to the Phi Beta Psi Sorority Cancer Research Fund.

The family of Ralph N. Werner created this Life Tributes page to make it easy to share your memories.