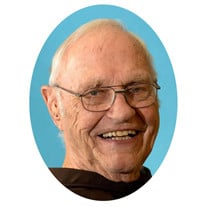 Franciscan Fr. Humbert Moster, OFM, was a people person: warm, plain-spoken, down-to-earth. Those qualities made him a popular pastor, chaplain and missionary for 60 years. Fr. Moster died unexpectedly June 1st at University Hospital in Cincinnati following a fall he suffered at Holy Family Friary in Oldenburg, Indiana. He was 90 years old. Fr. Moster served as a pastor or associate in Cincinnati, Ohio, Lafayette, Indiana, Southfield, Michigan, Bloomington, Illinois, and Hamilton, Ohio, but his heart belonged to Oldenburg, where he was born Oct. 21, 1929. He and his twin Walter were among 11 children of John and Emma (Obermeyer) Moster. Influenced by the friars and Franciscan Sisters, he entered St. Francis Seminary in Cincinnati in 1944, was received as a novice by the Province of St. John the Baptist in 1948, and professed first vows as a friar in 1949. He professed solemn vows in 1952 while studying Philosophy at Duns Scotus College in Southfield, Michigan. After Theology studies in Oldenburg he was ordained a priest June 11, 1957. Apart from assignments as a hospital chaplain in Baton Rouge, Louisiana and Louisville, Kentucky, Fr. Moster was a parish man. He returned to Oldenburg in 1993 as Associate Pastor of Holy Family Church and became a parochial “sub” for the Batesville Indiana Deanery, eventually serving as Parochial Administrator and then Pastor at St. Mary of the Rock and St. Cecilia parishes, adding St. Peter Parish in Franklin County Indiana to his care in 1996. A skilled carpenter, “He remodeled, rebuilt, restored,” wherever he lived, says friar Dan Anderson. Fr. Moster made a leap of faith in 2000, joining the friars’ new mission in Savanna-la-Mar, Jamaica. Back in the U.S. in 2003, he served briefly in Jackson, Kentucky, then returned to provide sacramental ministry in Oldenburg. He moved to Cincinnati in 2006 but on weekends drove to the small parishes he served in Indiana. He finally retired in 2015, first to St. Anthony Friary in Mt. Airy, then to Holy Family Friary in his beloved Oldenburg. Preceded in death by his parents and most of his siblings, Fr. Moster is survived by brothers Bernard (Mary Ann), Leo (Joanne) and Anthony (Patricia), and by his sister Beata Moloney and sister-in-law Kathleen Moster, as well as 45 nieces and nephews, many great nieces and nephews and his friar classmate, Fr. Bert Heise, OFM. Fr. Moster’s body will be received at 9 a.m. Friday, June 5, at Holy Family Church in Oldenburg, Ind., with visitation until the Mass of Christian Burial at 11 a.m. Burial will follow immediately at Holy Family Cemetery. Memorials may be made in care of FriarWorks, 1615 Vine St., Cincinnati, Ohio 45202.

The family of Rev. Humbert Moster created this Life Tributes page to make it easy to share your memories.

Send flowers to the Moster family.