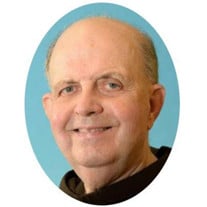 Fr. Robert “Bob” Weakley, OFM, died January 23rd at St. John the Baptist Friary in Cincinnati, Ohio. Fr. Bob, age 80, served as a teacher, pastor and chaplain and was known for his love for reading, walking and good conversation. Born on March 31, 1941 in Peoria, Illinois, he was one of four children of Leo and Dorothy (Gerber) Weakley. He attended St. Boniface School in Peoria before starting high school at the Spalding Institute in Peoria in 1955. After one year, he transferred to St. Francis Seminary in Cincinnati, where he was graduated in 1959. Fr. Bob was invested as a novice at St. Anthony Shrine in 1960, receiving the religious name “Walter”, returned to “Robert” before ordination. After his first profession of vows in 1961, Fr. Bob entered Duns Scotus College in Southfield, Michigan, where he earned a bachelor’s degree in philosophy and made his solemn vows on Aug. 16, 1964. Fr. Bob received his Master of Divinity degree from St. Leonard College in Centerville, Ohio, where he was ordained to the priesthood on June 8, 1968. His first assignment was as a teacher and head of the Religion Department at Cincinnati’s Roger Bacon High School from 1968 to 1976. During these years, he also earned a master’s degree in religion from the Catholic University of America in Washington, D.C. in 1971 by attending summer classes. In 1976 he was assigned to Batesville, Indiana as associate pastor of St. Louis Parish. In 1980 he moved to Emporia, Kansas as pastor of Sacred Heart Parish. Over the years Fr. Bob was assigned as pastor to a number of parishes throughout St. John the Baptist Province: Sacred Heart Parish in Calumet, Michigan (1986-92); St. Mary of Lourdes in Metamora, Illinois (1992-2001); and then back to St. Louis in Batesville (2001- 02). After preparing for the departure of the friars from St. Louis Parish, Fr. Bob took a well-earned sabbatical year. In 2003 he was named pastor of St. Michael Parish in Southfield, Michigan, which merged with other parishes in 2007 to become Transfiguration Parish. He remained there as pastor until 2009, when he moved back to his hometown of Peoria as pastor of Sacred Heart Parish from 2009 to 2012. He was then asked to serve as the director of priestly formation at Blessed Giles Friary in Chicago. In 2014, he began seven years of ministry as chaplain to the Franciscan Sisters of Oldenburg and guardian at Holy Family Friary. Fr. Bob was also actively involved in Alcoholics Anonymous, helping many, many people embrace and celebrate sobriety. Even in his last months of life, when he was no longer able to go out to AA meetings, he faithfully worked the program “one day at a time,” by staying in contact through Zoom meetings. By February of 2021, Fr. Bob’s health was diminishing. He retired from active ministry after celebrating his 60 year jubilee as a friar. In July, his continuing decline led to a move to St. John the Baptist Friary to receive needed nursing care. He is survived by sister-in-law Mary Weakley, brothers-in-law David Matranga and Dave Hall, and several nieces and nephews. He is also survived by friar classmates, Fr. Michael Chowning and Fr. Leonard Cornelius and his close friend, Sr. Aline Paris, RSM. In addition to his parents, he also preceded in death by his brother Michael and both of his sisters, Patricia Hall and Kathryn “Kay” Matranga. Friars, family and friends will receive Fr. Bob’s body at Holy Family Church in Oldenburg, Indiana, on Friday, January 28th at 9:30 a.m. The Mass of Christian Burial will be at 11 a.m. with interment following in the friars’ section of Holy Family Cemetery. Memorials may be made in care of FriarWorks, 1615 Vine Street, Cincinnati, Ohio 45202. Personal expressions of sympathy may be sent to the family through Fr. Bob’s nephew, David Matranga II, 3911 South Fauser Lane, Mapleton, Illinois, 61547.

The family of Rev. Robert Weakley OFM created this Life Tributes page to make it easy to share your memories.