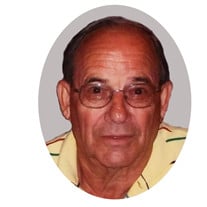 Robert T. Schaefer, age 88 of Batesville, died Friday, May 3, 2019 at Christ Hospital in Cincinnati. Born February 20, 1931 in Sunman, he is the son of Bertha (Nee: Brickler) and Alfred Schaefer Sr. He married Janet Hilbert August 9, 1952 at St. Anthony’s church in Morris and she preceded him in death June 18, 1999. Bob served in the Marines during the Korean War and following the service, he became a truck driver. He spent 30 years driving for the Ripley County Beverage Company and 15 year for the Retzner Oil Company. He was a member of St. Louis Church, the Prell-Bland American Legion Post #271, Ripley County V.F.W. Post #3183, an advisory board member of the Korean War Veterans Memorial, a former Batesville City Council member and a former Batesville Park Board member. Bob loved John Deere tractors. He had quite a collection and liked showing them at tractor shows and power of the past events. An avid card player who enjoyed Euchre, Solo and 31, Bob also enjoyed sports, especially I.U. Basketball and the Reds. A regular for coffee at McDonald’s in the mornings, he liked going to the Casino and working on his farm as well. What he enjoyed most was being with family and friends. He is survived by daughters Shelly Hellmich of Greensburg, Theresa Schaefer of Cincinnati; son Larry Schaefer of Wildomar, California; companion Marge Fohl of Cedar Grove, Indiana; sister Rosemary Conrad of Cincinnati; brothers Harry “Butch” Schaefer of Batesville, Lester Schaefer of Connersville, Indiana; grandchildren Geoff, Nick, Seth, Craig, Erin, Stacey and great grandchildren Grayson, Jonah, Lilly, Carter, Tate, Myla, Mikey and Daniel. In addition to his wife and parents, he is also preceded in death by his sister Bertha Mae Pfliegel and brothers Raymond, Elmer, Ralph, Alfred Jr., Eugene and John Schaefer. Visitation is Tuesday, May 7th, from 4 – 7 p.m. at the funeral home. Funeral services are 10 a.m. Wednesday, May 8th at St. Louis Church with Rev. Stan Pondo officiating. Burial will follow in the church cemetery with military graveside rites conducted by the Prell-Bland American Legion and the Ripley County V.F.W. The family requests memorials to the Batesville Fire Department or the Ripley County V.F.W.

The family of Robert T. Schaefer created this Life Tributes page to make it easy to share your memories.

Send flowers to the Schaefer family.