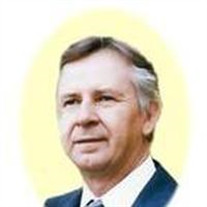 Robert O. Seevers of Batesville, age 84, died Sunday, August 11, 2013 at Ripley Crossing. He was born on May 10, 1929, in Milan, Indiana and is the son of Clare (Punte) and Omer Seevers. He married Ethel M. Hoff on February 15, 1947. Bob was employed at Batesville Casket Company and at Hill-Rom Company retiring after 43 years of service. He also held a part-time position at Weberding’s Wood Carving Shop for ten years. He served as a member of the Knights of Columbus. Bob was a very talented man and his family and friends remember him as a jack of all trades. He was always fixing things around the house and was a master when it came to working on cars. When Bob was not working, he would enjoy various sports such as bowling, golfing, and horse shoes. He had a passion for fishing and loved the outdoors in general. He especially loved spending time in the summer tending to his backyard garden. His children remember the delicious shish kabobs he would prepare on the grill with his famous secret sauce and the fudge and candies he would prepare each Christmas. These were special treats everyone always looked forward to! Picnics would be a frequent activity when the kids were young and they each have special memories of when dad would build a fire and whittle each of their sticks so they could roast hot dogs and marshmallows. He even built a family picnic table so they could enjoy picnics at home in the backyard as well! Bob inspired in his children a strong foundation of working hard, being strong, and never giving up. His words to live by, regardless of the challenges were, “Make the best of it”. He is survived by his wife Ethel; daughters Shari Simmermeyer of Batesville, Sandy Seevers of Indianapolis, and Terri Dickey of Batesville; sons Steven of Cincinnati, Ohio, David of Greenfield, Indiana; five grandchildren and four great grandchildren; sister Kathleen Kurtz of Batesville. He is preceded in death by his parents and sister Dorothy Denni. Visitation is Monday, August 19, from 9:00-11:00 at the Weigel Funeral Home. Funeral services follow at 11:30 a.m. at St. Louis Church with Rev. John Geis officiating. A private burial service will be held for the family. The family requests memorials to the Alzheimer's Association National Headquarters for Research.

The family of Robert O. Seevers created this Life Tributes page to make it easy to share your memories.

Send flowers to the Seevers family.